At least that’s what one might conclude from the headline – and the research report itself.

Except the research is preliminary (as noted in William Rabb’s article) , and actually reading Rabb’s WCC article – and the study itself – and doing a little Googling – reveals significant problems with the research.

To the researchers’ credit, they make it clear their conclusions are preliminary and “comments are welcome” but I fear many will read the headline, tweet it out, and use it as justification to reduce workers’ indemnity benefits.

Reality is, the study has multiple flaws, rendering the authors’ conclusion that:

“increasing the generosity of wage replacement benefits does not impact the number of claims but has a large impact on claimant behavior, leading to longer income benefit durations and increased medical spending.”

is baseless at best.

Among the multiple flaws in the study is the failure to account for other factors that may well have driven an increase in disability duration and medical expenses. The researchers based their analysis on workers’ compensation reforms in Texas and data from 2005 – 2009. The reforms, which increased disabled workers’ wage replacement levels, also affected many other parts of workers’ compensation regulations and benefits.

For example, medical reimbursement in 2008 spiked due to changes in the Texas WC medical fee schedule – which were largely driven by increases in Medicare’s fee schedule.

Then there’s the 2008 – 2009 recession, which significantly affected employment opportunities in the Lone Star State. I’d suggest that the recession affected employers’ desire and ability to return injured workers to jobs that no longer existed or where hours had been greatly reduced. It also limited re-employment opportunities for workers who no longer had jobs to return to. 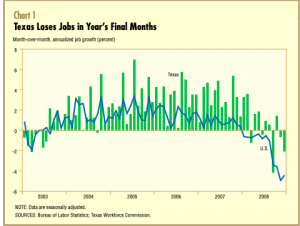 And the forecast for 2009 was even worse… 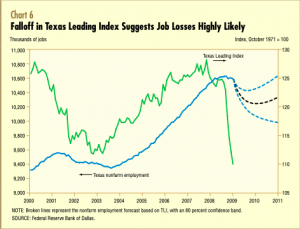 (for more discussion, here’s the Dallas Fed’s analysis. Evidently the authors didn’t read this, or if they did, did not reference it in their footnotes or references.)

I’m no PhD economist – but I can do a Google search. And so can you – I’d encourage all to question “research” that makes bold assertions.