OK, let’s set aside the partisanship to objectively consider that question.

Senate Republicans are writing a bill in secret that would: 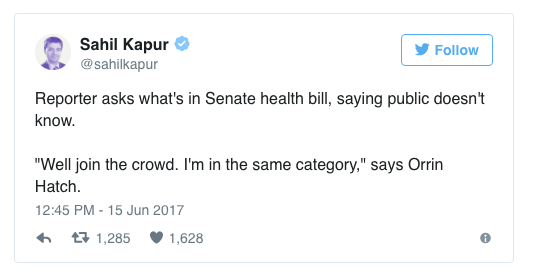 Senate Majority Leader McConnell has crafted a process to repeal-and-replace ACA that:

Then-Minority Leader McConnell had this to say about ACA’s passage in 2009:

“This massive piece of legislation that seeks to restructure one-sixth of our economy is being written behind closed doors, without input from anyone, in an effort to jam it past not only the Senate but the American people…”

Are you OK with this?

3 thoughts on “Why are Senate Republicans hiding their health care bill?”