In a move that caught all Capitol Hill – and me – by surprise, President Trump and key Senators finalized the outline of the GOP’s new healthcare plan over the weekend.

Set to be announced later today, the plan builds off the faith-based “sharing” programs already in place in the ACA, greatly expands their reach, incentivizes employers to adopt faith-based coverage, and enables these programs to compete in the senior market. There are a half-dozen or so ministry/faith-based programs now in operation with total membership around the million mark.

Unlike regular insurance, members “share” the cost of care by paying into a central fund that then reimburses individuals for needed medical services.

Currently faith-based coverage is provided by entities including Liberty Healthshare, Christian Medi-Share, Samaritan Ministries, and Altrua Healthshare. As of today, these entities don’t have to provide the same level of benefits, coverage, or financial protection insurers do under the ACA. And, they are pretty much exempt from regulation as they aren’t “insurance” per se.

Faith-based sharing programs will compete with the big healthplans for members in the federal – and perhaps states’ – healthcare exchanges. The plans, which are much less expensive than “regular” health insurance, may well see huge gains in membership.

On ABC’s thisweek Sunday talkshow, Whitehouse Chief of Staff Mick Mulvaney  asserted the plan would deliver on the President’s promise to protect Americans with pre-existing conditions. “We’ve heard it over and over again, Americans trust their churches and ministers to do the right thing [which includes addressing pre-existing condition coverage]. So, we’re going to build off the amazingly successful faith-based programs now in place, expanding their reach and helping them compete in the free market.”

When asked how the new plan would maintain or expand the number of Americans covered by health insurance, Mulvaney didn’t get into any details other than claiming “faith-based programs will have much lower administrative costs as they don’t have all the overhead the big insurers do…this will make insurance much less expensive, which means more people can afford it.” 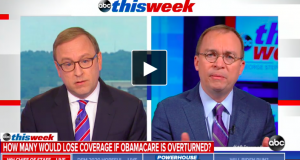 It appears Vice President Mike Pence has been strongly advocating for the faith-based approach for some months.  Evidently Pence, a self-described evangelical Christian, was prepared when the President publicly called for Republicans to be “the party of great healthcare” last week. The VP met with Trump, Mulvaney, and key Senators over the weekend and finalized the outline of the plan.

Mulvaney, who is one of the members of Trump’s team leading the charge on repealing Obamacare, said Sunday “There’s absolutely zero daylight between the president and vice president on this issue.”

Interviewed on CNN’s State of the Union yesterday, Mulvaney went further, describing the plan as fulfilling Senate Republicans’ request that the Administration provide them with “principles” that they could build a healthcare plan around.

Here’s the issue. Faith-based programs don’t have to keep a certain level of financial reserves, can deny payment for any reason, exclude any condition, and cancel coverage. And, in most states no regulator is watching over the programs.

Sure, this will make “coverage” cheaper, but there’s no guarantee it will be there when the buyers need it.

I’d expect this approach to face tough sledding in the Senate, and likely won’t be considered at all in the Democratic – controlled House. However, it’s likely Trump will try to do much of the heavy lifting via regulatory means and Executive Orders. However, these efforts will undoubtedly be challenged in court, where Trump has had a pretty poor record. I’d also expect the big healthplans will roll out their lobbying big guns.

But…the move further cements Trump’s standing with evangelical. As he’s clearly playing to his base to prep for the next election, it will serve him well.

Just when you think you’ve heard it all…