Yesterday was post 2 of Pharmacy Week at MCM, an intro to drug pricing. Today we’ll get you up to speed on why the list prices for drugs are irrelevant – mostly.

Recall that almost all work comp drug fee schedules are based on Average Wholesale Price – a metric that is three falsehoods in one, as it is neither “average”, “wholesale”, or the “price”.  Regardless, when calculating the “savings” from a PBM contract, buyers almost always use AWP as the baseline. And that’s what buyers report to their bosses and customers; here’s what we saved below states’ fee schedules… 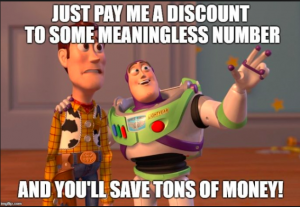 As we discussed yesterday, brand drug manufacturers pay PBMs (and other entities in the drug supply chain) rebates on their drugs so the PBMs will allow patients to get those drugs without going thru the Prior Authorization process.

That’s quite effective in the commercial health insurance world, where insurers have complete control on what drugs are “on formulary” and drive consumer behavior by setting co-pay amounts. It’s a lot less effective in work comp, where formularies are driven by a) state regulations and/or b) treatment guidelines. In either case, work comp payers can’t encourage patients to use preferred brand drugs by setting the co-pay lower than non-preferred brand drugs.

That’s not to say work comp PBMs don’t get paid rebates for brand drugs – in many cases they do, although the amounts can be a lot lower for comp.  And, PBMs often, and with some justification, use these rebates to offset price reductions.

You’re wondering: “well, how many dollars are we talking about?” I’ve heard different things from different people, from an average of $35 per brand script to $74.  Or, in percentage terms, up to 30%. Those payments aren’t for ALL brand drugs, and it’s highly likely the manufacturers don’t even know they are sending those dollars to work comp PBMs and payers; Work comp is such a tiny piece of total drug spend that most entities don’t bother to track it.

Rebates are being paid to work comp PBMs and payers. Some payers don’t want the rebate payments; they’re afraid those payments could be construed as affecting decisions about medical treatment.

Others look at this as a fiduciary responsibility issue; they want to know so they can better manage their customers’ dollars.