Later this week I’m going to do a series of posts unpacking these findings and opining on what it means for you. For now, here are the key takeaways

We’ll focus on indemnity and medical expenses for a moment, as these are key cost drivers. Note that these data are ONLY for NCCI states – which don’t include some big states such as New York.

The graph below shows that indemnity claim severity – the cost per claims did increase – albeit modestly. 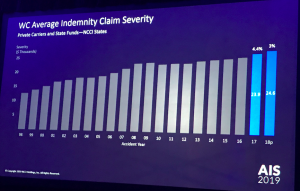 Medical costs barely increased last year. I’ll have a lot more to say about this in a future post. 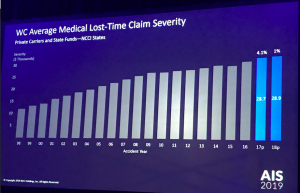 For example, payroll increased by 5.3% in 2018, more than offset by total loss costs (driven by frequency and claim costs) which dropped almost 9%. The takeaway – claim costs decreases are more than offsetting increases in payroll and employment. That happened despite a big increase in employment in construction, which is a higher frequency, higher severity industry.

The result, only 5 percent of surveyed respondents saw an increase in their WC premium rate this year; almost everyone had no increase or a decline.

This has never happened in workers’ comp. We have never seen this level of financial performance, and it is clear insurers are still trying to figure out why this is happening, when it will end, what will cause a change, and what the warning signs will be.

Life is pretty great right now. We do know it will end.  We do NOT know what will cause that event.