This month marks the second longest economic expansion in US history; it’s been a decade since things turned around back in June 2009.

Like all expansions, this one is going to end – and there’s mounting evidence it will happen soon.

The latest Fed forecast shows GDP growth slumping to 1.3% this quarter, driven in large part by a drop-off in commercial and industrial construction.

Without Congressional action, we will see another government shutdown this fall; the Treasury will run out of money by early November. There’s hope the Republican-controlled Senate and Democratic-controlled House will reach some sort of deal. Whether an increasingly-volatile President – who has been public about his lack of concern about the possibility of the US defaulting on its debt – will approve it is anyone’s guess.

Absent a deal, $125 billion in Federal spending will be cut immediately, thanks to the 2011 sequestration bill.

Manufacturing growth is slowing. New data shows the U.S. Manufacturing Purchasing Managers’ Index is at its lowest point since the last recession. From Bloomberg:

customers were postponing orders due to growing uncertainty about the outlook. Similarly, new business from abroad contracted by the quickest pace since April 2016 to the first decline since July 2018. 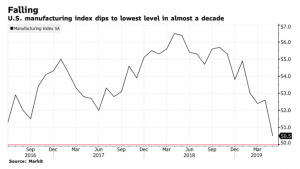 One industry that’s hurting is autos. The president’s latest moves to slap tariffs on Mexico will increase US consumer and business costs alike; the auto industry is particularly vulnerable as Mexico supplies a lot of car parts – and 2.6 million cars – to the US. Analysts project the tariffs would add about $1,300 to the price of an average car. If Trump keeps his promise to continue to raise tariffs, that will jump to $10,000 on Mexican-made autos and trucks by October.

There’s a lot more data out there on this – the inverted yield curve is perhaps the one most worrying to economists.

So, we can fix this, right. Well, it’s going to be a lot harder to dig out of the next recession than it was to crawl out of the Great Recession. It’s increasingly likely the Fed will slash interest rates this year in an effort to keep the economy growing. Of course, rates are already near historic lows and the Fed has few resources left to buy back debt in “quantitative easing” without risking rising inflation…the tools available to the Fed to reverse a downturn are few and may be overmatched.

It’s going to happen. When it does, worker’s comp payers will see a downtick in claims frequency but likely a rise in claims duration.

From here, my take is the next recession is going to be long and deep; we just don’t have the tools to claw our way out of it.