What the heck is going on in the Golden State?

For the second year in a row, claim frequency for self-insured employers is up (frequency is the percentage of FTEs that file a work comp claim). Over the two years the total increase in frequency was 12.4% while actual claim counts rose 10.8%. 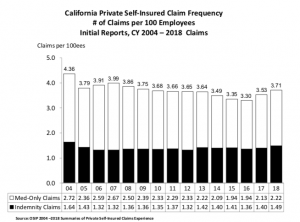 Meanwhile, over that same period, work comp premiums declined…(also from CWCI); driven mostly by a drop in premiums charged for covered payroll (so this wasn’t due to fewer employees covered by work comp). 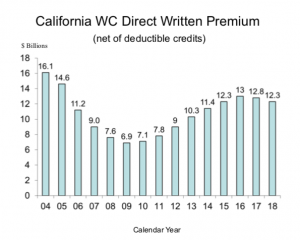 What is going on here?

For self-insured employers, it’s not more workers; the number of FTEs marginally increased – and frequency accounts for employee count variation. But, those workers are suffering injuries/illnesses slightly more often.

Insurers’ premiums are driven by payroll, past and projected future claim counts and costs – but also by insurers’ business priorities. With work comp insurance profits remaining high, it is indeed possible that underwriters are ignoring warning signs in their pursuit of market share and more premium dollars.

This has happened before – and it always ends badly.

It’s also theoretically possible the “LA Basin Effect” (cumulative trauma claims inspired by unscrupulous doctors and lawyers in the Los Angeles area) is having a disproportionate effect on self-insured employers. I kind of doubt it, as large employers are more attuned to this type of mischief than smaller, insured employers.

There’s another possible factor affecting premiums that I’m pursuing; too early to dig into it but suffice it to say that it might well offset the premium impact of any frequency increase.

“I am on the verge of mysteries, and…the veil which covers them is getting thinner and thinner.” Louis Pasteur