In which I attempt to describe the top takeaways from the latest research and what it may mean for you.

WCRI’s latest report on Interstate variations on Dispensing of Opioids is available; free for members, nominal cost for non-members.

Using your data to highlight problematic states – and regions within states – is critical to understand what’s driving opioid usage among your patients.  The industry has done a great job reducing opioid usage but can make a LOT more progress by figuring out the commonalities among chronic opioid consumers.

NCCI’s just released a report on the impact of formularies on work comp pharmacy, comparing what happened in Arizona and Tennessee after implementation of a closed formulary to similar states that didn’t adopt a formulary. Note the research was based on data from mid-2017.

Opioids have been the biggest driver of formularies; this report’s finding that in these states there was little change in the patients prescribed opioids is revealing.

I’m not a fan of binary formularies; they are the bluntest of instruments. While they may serve an initial good: they reduce the use of drugs that are usually inappropriately prescribed, they are not disease-state and/or patient-specific. Sure, Y/N formularies are easy to use; so’s a bone saw and ether.

We’ve moved beyond bone saws and ether, and need to do the same with formularies.

More thought-provoking work from NCCI focuses on the impact of enhanced vehicle safety systems and workers comp. Quotes of interest include:

With all the talk about autonomous vehicles, we may have missed out on a bigger and nearer-term sea change. Mostly-autonomous vehicles won’t likely be common for some time, but many of today’s car models come with lane-following, collision warning, autobrake and other accident-avoidance technology.

We need to understand the impact of these “interim” technologies on MVAs and associated claims.

New research from the Kaiser Family Foundation shows who we should be focusing on helping. Just 1.3% of patients rack up almost 1/5th of all medical costs; 5 percent of patients account for half of all costs. 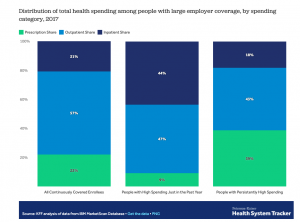 Key takeaway – the chronic patients cost the most over the long term – and are also likely to have the most modifiable health conditions.