Total health insurance cost for the average family with employer-sponsored coverage is over $22,000 annually.

Even families that have coverage are being crushed by costs not covered by insurance. 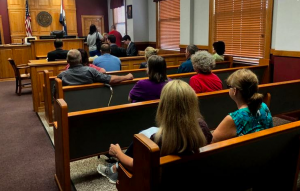 Hospitals and health systems are going out of business, leaving towns and rural areas with reduced access healthcare.

Health systems and hospitals have a Hobbesian choice – force families into bankruptcy or go bankrupt themselves.

While Becker’s reports all but one of the hospitals going belly up are in states that didn’t expand Medicaid.   While there’s no question the problem is much worse in non-expansion states, facilities’ fiscal problems aren’t all solvable by Medicaid. Hospitals from Philadelphia to Chicago are facing bankruptcy, leaving behind massive unpaid bills and huge gaps in the provider landscape.

Growing evidence indicates Medicaid expansion has been a big positive for expansion states:

Medicaid expansion was associated with improved hospital financial performance and significant reductions in the probability of hospital closure, especially in rural areas and areas with higher pre-ACA uninsured rates.

Another Louisiana study found that as a result of the federal infusion of Medicaid expansion dollars into the state’s economy, Louisiana derived an additional $103.2 million in overall state tax receipts (which exceeded the state dollars budgeted for the Medicaid expansion program by close to $50 million) and local governments derived an additional $74.6 million in local tax receipts. A study in Montana found positive financial effects for businesses due to infusion of federal dollars to fund health coverage for workers

The net is this – People want their kids to be covered, to be protected from medical cost bankruptcy, to have access to care.

Politicians who offer solutions to these problems are finding receptive audiences, even in red states and states where Medicaid expansion was turned down. Louisiana, Kansas and Maine are three states where healthcare was a significant factor in gubernatorial elections – all have expanded, or working to expand Medicaid.