Surprise medical bills happen when you think you’re going to an in-network medical provider, only to learn some of your care was delivered by a non-contracted provider who can bill you whatever they want.

In work comp, this happens when your employee suffers a serious injury on the job, and you send her to the nearest emergency room – which happens to be at a hospital in your work comp PPO network. You then get a bill for $30,000 because the ER is operated under contract by TeamHealth or Envision, private-equity owned companies that aren’t in your network. 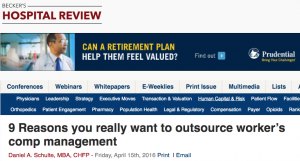 While this has made headlines in the private insurance world, it has yet to get much attention from work comp insurers. That may be because comp payers are pretty unsophisticated about facility billing, despite claims from bill review departments/vendors to the contrary. (there’s legislation in Texas that deals with a very narrow slice of the issue; it will have almost no impact on the problem save for patients treated at a federal medical facility)

Congress has been blathering about “solving” the surprise medical bill problem all year – making as much progress as usual, that being none. That’s largely because the PE-owned medical service companies are spending tens of millions fighting legislation intended to stop surprise billing.

What’s clear is while the PE firms may win this battle, they will certainly lose the war. The surprise bill fiasco will generate huge returns over the short run, but lead to major reform as voters get madder and madder about this legal theft. The PE firms fully understand this. They are fighting to preserve their right to rip off patients as long as they can, and will keep doing so until voters rebel.

So, to Blackstone, KKR, Welsh Carson et al, enjoy it while you can. This is yet another example of hugely profitable investors’ short-term fixation on short-term profits.  While it will lead to massive short-term profits, it is creating a massive backlash, one that will inevitably lead to laws and regulations that will crush their business model.

In the meantime, employers and taxpayers will pay the price – especially because work comp hasn’t woken up to the issue.

Analyze your facility spend to find out.