Friend and colleague Alex Swedlow took the podium at the California Self-Insurers’ Association to discuss what’s going on in the Golden State, and what you need to do to manage your program.

First up – why are California’s admin expenses so unbelievably high?

Well, the medical delivery system is quite expensive.  The volume of medical services delivered is just high – especially for pretty expensive services.

Second, there are few controls that limit demand – we’re talking deductibles and copays – and no shortage of supply of providers willing to meet that demand.

Third, dispute resolution is challenged by lots of litigation, by a UR/IMR process that is expensive and (my words not his) abused by a relatively small number of docs and attorneys.

Fourth – this all drives medical management expenses up.  Waaaaay up.

The result – medical payments that are 58% higher than the median state – and second highest of all states.

Myth bust – there’s no association between Fee Schedule levels and medical costs – so it isn’t a problem fixable by cutting the fee schedule. 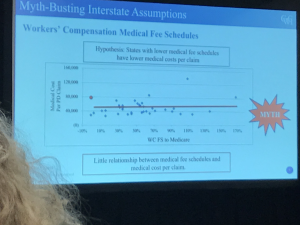 Of course, some protested that the reforms – UR, employer direction, IMR, MTUS (clinical guidelines) etc – were going too far and harming workers. Citing the huge influx of UR, they contended a lot of needed care was being blocked.

Except that wasn’t true. In fact, the vast majority of care performed and/or reviewed was delivered – that includes the 95% of IMR requests submitted by applicant attorneys.

The good news is there are fewer UR/IMRs for drugs these days – which tracks a similar trend in drug spend overall  – and in particular a major decline in opioid consumption.

Shout out to Peggy Sugarman who runs work comp for the City and County of San Francisco – she moderated the session, which in this case meant she clarified, provided her own insights, interpreted, and generally added a ton of value. Peggy made me re-think the “moderator” role.

CWCI will be releasing an update on current goings-on in the UR/IMR space, providing stakeholders with specific attention paid to modifications rather than approvals or denials.

One thought on “What’s up with California work comp?”