Healthcare is the central issue in the 2020 election.

If Republicans are able to keep healthcare out of the conversation, they win. If Democrats make healthcare THE issue, they win – with one big caveat.

Insurers and hospitals are making record profits, while a family of four has to spend $21,000 before they get any coverage.

Healthcare is unaffordable for middle-income families without subsidies or employer support. In many areas, the cheapest bronze plan is around $13,000 and comes with an $8000 deductible. Before mom dad and the kids get any benefit other than preventive care, they’re out $21,000.

Rural Americans are more likely to have high-deductible plans. And, even if the premiums are subsidized, there’s still their monthly cost plus an $8,000 deductible.

That is, if they can find a provider when they need care.

121 rural hospitals have closed over the last 10 years – 44 in the past three years. with the biggest impact in states in the south and central US where the combination of under-insured patients and no Medicaid expansion has left many small facilities on the brink of bankruptcy – while dozens more have closed.

Meanwhile, back in DC…

There’s been zero meaningful progress on drug prices, an issue of particular concern to seniors. Likewise, all the talk about surprise medical bills has yielded exactly no solutions, as hospital lobbyists have successfully quashed meaningful reforms.

Millions of us have pre-existing conditions; we risk losing coverage – and paying much more – if the Trump-supported Texas lawsuit to overturn Obamacare is successful. 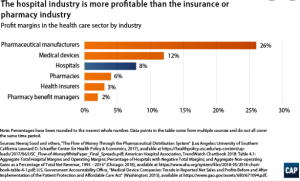 While consumers are getting hammered, hospitals, health systems, and health insurers are raking in the billions.  Near-record profits for insurers, and very strong margins for pharma device manufacturers and hospitals stand in stark contrast to flat wages for most Americans.

Here’s the caveat. Sure, Republicans have no solution to the healthcare coverage and cost crisis. But Americans – at least the ones who vote – don’t want Single Payer.

If Democrats stay focused on healthcare reform and avoid Single Payer, they win.

If not, they lose.

4 thoughts on “The Healthcare Election”