Ignore anyone who says we’ll be back to normal by this date or that.

The problem is straightforward –

Testing is only now ramping up – six weeks+ into the COVID era there have been less than a million tests in the US; we lag well behind other developed countries in the percentage of residents tested. 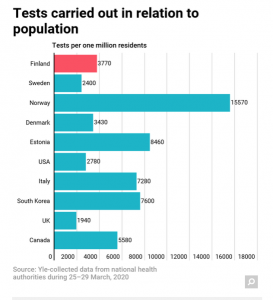 The painful reality is the government’s repeated missteps and screwups have left us in the dark about the real dimensions of the spread of COVID19.

Where are we today

We don’t have current, accurate data from an official governmental source on the actual number of COVID19 tests that have been conducted. The CDC’s own database reports a drop in the average daily number of tests since March 17 – but that doesn’t include all tests. 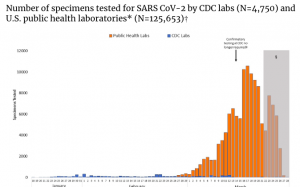 Fortunately, there’s a volunteer project documenting the test count and other key statistics; you can keep updated here. Pretty impressive effort, with data quality ratings as well so you can determine for yourself your level of comfort with the accuracy of the count.

Again according to the Covid tracking project, as of 7 am eastern yesterday March 30, 19,839 patients were hospitalized and 2,447 died.

Another leading source is Johns Hopkins University; it’s numbers are slightly different than the Covid Project (143,055 positives and 2,513 deaths as of 6:11 am eastern yesterday March 30).

I’ll let you ponder why a group of volunteers and a university are able to do a better job tracking these data than the nation’s disease tracking institution. (fortunately the Trump Administration, which just three weeks ago had sought a $1.2 billion cut to CDC ‘s budget – and an additional $452 million cut to National Institute of Allergy and Infectious Diseases (NIAID)’s budget – changed it’s mind.

Then there’s the report from Wuhan China (the apparent originating location for coronavirus that 5% – 10% of people who a) tested positive, and b) recovered, have now tested positive again.

Communities and institutions that aren’t taking tough measures to control exposure are getting hammered.

Elected officials and many citizens of Fort Myers, FL listened to politicians, not scientists, keeping beaches, restaurants, and a casino open despite warnings. In a county where 30% of residents are over 60, only about 4 out of 10 residents complied with isolation guidelines last week. This may well have devastating consequences – so far there are 171 confirmed cases and 6 deaths in Lee County. with 40 hospitalized.

Those totals will certainly increase.

Many residents of The Villages, a retirement community in central Florida, ignored pleas to avoid socializing; 29 have tested positive as of last Friday.

Liberty University was one of the very few colleges that invited students back to campus after spring break; not surprisingly some showed COVID19-type symptoms, and at least one has tested positive. Yesterday Liberty President Jerry Falwell disputed some of the Times’ reporting; note earlier Falwell dismissed COVID19, comparing it to swine flu and inferring it was a North Korean plot or an effort to harm President Trump.