Ten days ago I wrote:

Ignore anyone who says there will be this many infections and this many deaths – their “models” are based on data that is likely wildly inaccurate and [based on] assumptions that differ wildly.

Not much has changed.

Today we’ll dive into “official” infection rates and why they may be way less than the actual infection rates. (for those wanting a lot more detail, try this.)

How many of us are infected?

According to testing results, in the US about 550,000 people have tested positive for coronavirus.  However, some researchers suggest as many of 12 million may have been infected, with the vast majority showing no or mild symptoms. (original source is Reason magazine, an avowedly libertarian publication)

DO NOT take that as gospel or dismiss it outright; the researchers relied on data from testing from China as well as other sources; some have questioned the reliability of data and testing kits from China. Other scientists have employed mathematical modeling to calculate actual infection rates; their findings indicate we’re identifying about 2/3rds of COVID19 cases.

Remember, all projections rely on data that are woefully inadequate. Reality is we do NOT know how many of us are infected, because here in the US (and in many other countries) the rollout and ramp up of testing has been far too slow. As you can see, after an initial increase, in the US we’ve been averaging less than 150,000 tests per day for more than two weeks. 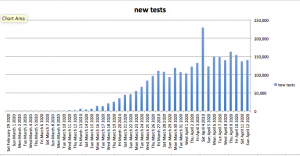 data from CovidTracking project; source here (btw, this is a highly credible entity with full transparency re data sources)

From the research reported by Reason:

Credible research indicates Insufficient and delayed testing may explain…Germany, which has detected an estimated 15.6% of infections compared to only 3.5% in Italy or 1.7% in Spain. Detection rates [the percentage of people who are actually infected that are tested and counted as infected] are even lower in the United States (1.6%) and the United Kingdom (1.2%)…As of March 31, [research article authors] Vollmer and Bommer calculate confirmed cases represented just 3.5 percent of infections in Italy, 2.6 percent in France, 1.7 percent in Spain, 1.6 percent in the United States, and 1.2 percent in the U.K. [emphasis added]

In other words, the true number of infections was between 29 and 83 times as high as the official tallies in those countries [emphasis added]

The countries with the highest estimated detection rates were South Korea (nearly 50 percent), Norway (38 percent), Japan (25 percent), and Germany (16 percent)…The estimated prevalence of infection ranged from 0.1 percent in India and Japan to more than 13 percent in Turkey; it was 3.6 percent in the United States.[emphasis added]

To be clear, the researchers made several assumptions, some based on other researchers’ work. And, Vollmer and Bommer’s findings are quite different from Rao and Krantz’s.

Net – we do not KNOW how Americans are infected…but it is definitely more than a half-million.

We will not KNOW until testing using a statistically-credible sample size and methodology has been done and reported.