More than 73,000 of us died of drug overdoses in the 12 months ending February, 2020. That’s four thousand more deaths than the previous year.

(note graph below is for a slightly different time period) 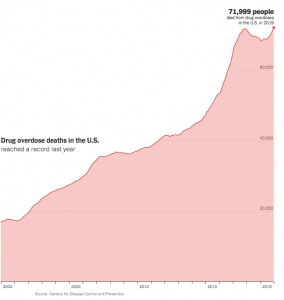 And it is getting worse.

Preliminary data indicates the death count is up 13% so far this year.

The number of non-fatal overdoses in Vermont tripled this year, with almost 9 out of 10 involving fentanyl.

Meanwhile, the drug dealers directly responsible for much of the horror are about to escape with most of their billions in ill-gotten gains intact.

The drug dealers are the Sacklers, owners of Purdue Pharma. Purdue developed and marketed OxyContin; A recent study,  authored by the Wharton School, Notre Dame, and RAND reported “the introduction and marketing of OxyContin explain a substantial share of overdose deaths over the last two decades.”

This from a New Yorker article:

Behind the scenes, lawyers for Purdue and its owners have been quietly negotiating with Donald Trump’s Justice Department to resolve all the various federal investigations in an overarching settlement, which would likely involve a fine but no charges against individual executives. [emphasis added]

A lawsuit indicated over the last few years, the Sackler family has transferred billions of dollars offshore, effectively protecting those assets from the US justice system. This from the New Yorker:

In a deposition, one of the company’s own experts testified that the Sacklers had removed as much as thirteen billion dollars from Purdue.

The states have asserted in legal filings that the total cost of the opioid crisis exceeds two trillion dollars. Relative to that number, the three billion dollars that the Sacklers are guaranteeing in their offer is miniscule. It is also a small number relative to the fortune that the Sacklers appear likely to retain, which could be three or four times that amount. [emphasis added]

This country has jailed millions of poor people for decades for drug-related crimes; the Trump Administration appears poised to let the white-collar drug dealers most responsible for the opioid crisis walk away with billions of dollars they made addicting America. 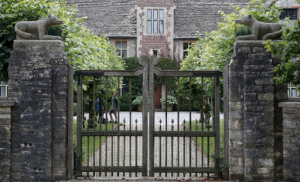 The Sacklers should rot in hell, but they will likely live on in unimaginable luxury. We should all be outraged.

4 thoughts on “Opioids – Deaths up, Sacklers likely to escape justice”