CWCI released a report detailing the latest in what’s been a long line of schemes to manipulate workers’ comp regulations to suck money out of employers’ and taxpayers’ wallets.

CWCI’s Bob Young, Jackie Secia, and Steve Hayes conducted the research, which found opioid scripts dropped from three of every ten prescriptions in 2011 to one out of nine today. That’s the good news – or rather, great news.

The research also identified two drugs – fenoprofen calcium and ketoprofen as the other primary reason NSAID costs jumped from 14.2% of total drug spend to 23.5% in less than two years. Oh, and these meds aren’t wonder drugs that grow hair while curing low back pain and strengthening joints and rejuvenating shoulder cartilage…they are similar to aspirin, ibuprofen, and naproxen.

OK, here’s how the scheme works.

First, both drugs are exempt from prospective Utilization Review (also known as Prior authorization) requirements, so prescribers don’t have to get approval before prescribing, and dispensers don’t have to worry about getting paid.

Second, neither drug is on the California workers comp drug fee schedule, so employers and taxpayers have to pay 83% of the “average wholesale price”. AWP is a number made up by the drugs’ manufacturers, and can be anything they want it to be. Over the last four years, the average cost of fenoprofen calcium (FP) sextupled (is now 6 times higher); ketoprofen’s costs jumped more than ten times.

So, some smart schemers figured out that they could make a shipload of money by a) jacking up the price of a drug that costs pennies to make, and b) convincing a few docs to prescribe it to workers’ comp patients.

FP and ketoprofen are the main reason “not listed” drugs suck up more of employers’ and taxpayers’ dollars than other drug categories. 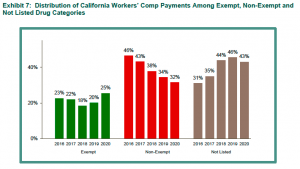 There’s a lot more we need to know – who’s pushing these drugs, why are docs prescribing them, what does the supply chain look like, are FP and ketoprofen also gaining traction outside of workers’ comp.

That said, we know enough right now to know we’ve got a big problem on our hands.

Every PBM program must have an early warning capability to identify emergent drugs, and an ability to adapt quickly to ensure abuse is minimized.