Why some people refuse to get vaccinated, but are fine with taking large doses of drugs commonly used for horse de-worming.

Out of 163,000,000 people fully vaccinated, there have been 1,263 COVID deaths…yet anti-vaxxers still refuse to do the easy, safe, and smart thing. 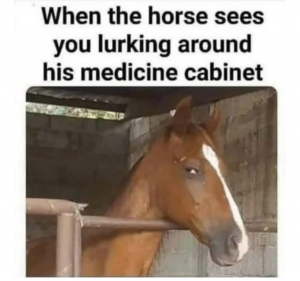 Yep, in just one state, Missouri, there’s been a big jump in calls to the poison control center due to people in distress from taking ivermectin; at least two Mississippians have been hospitalized due to overdosing on the drug…. and 7 out of 10 calls to the center have been for ivermectin.

Ivermectin is also a big problem in Texas…

Ivermectin “tablets are approved by the FDA to treat people with intestinal strongyloidiasis and onchocerciasis, two conditions caused by parasitic worms.”

News flash – COVID is NOT transmitted by parasitic worms. Nor is there ANY credible evidence it protects against COVID or has any meaningful effects.

Yes, there is a research paper based on a meta-analysis authored by several scientists but these “scientists”:

Oh, and “The few existing higher quality clinical trials testing ivermectin against the disease uniformly have failed to find a positive result. It’s only the smaller, lower-quality trials that have been positive. This is a good indication that the drug probably doesn’t work.”

Double Oh, and the rest of the scientific world isn’t having their BS.

And one more Oh…

Not only is ivermectin very much unproven, it is also dangerous when taken in large doses. From the FDA:

You can also overdose on ivermectin, which can cause nausea, vomiting, diarrhea, hypotension (low blood pressure), allergic reactions (itching and hives), dizziness, ataxia (problems with balance), seizures, coma and even death.

There are multiple reports of people taking horse-level doses of ivermectin;

animal drugs are often highly concentrated because they are used for large animals like horses and cows, which can weigh a lot more than we do—a ton or more. Such high doses can be highly toxic in humans.

So we have knuckleheads overdosing on horse de-worming drug while they refuse to get vaccinated because…why?

No – it’s actually because their “tribe”/”clan’s” views are more important to those individuals than ANYTHING else – including their lives and the lives of their loved ones, babies, grandmothers and spouses. 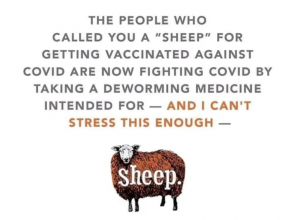 Belonging to the tribe, and being accepted by the tribe, is the dominant force in the life of anti-vaxxing ivermectin-takers – and no amount of science, marketing, education, compassion or reason is going to get most of them to change.

14 thoughts on “Help me understand…”