Three days ago President Biden signed the Infrastructure Investment and Jobs Act, a notable accomplishment coming after bipartisan support in Congress.  Pretty remarkable that this happened at all; past Administrations  – both Democratic and Republican that enjoyed majorities in Congress were unable to pass this desperately needed legislation.

There’s lots of good news in the Act; including: (source Business Facilities)

States are already targeting the funds for much-needed projects; North Carolina is getting $1.5 billion for bridge repairs,  broadband expansion, and transportation upgrades – and more dollars for other projects.

Wyoming’s roads, dams, water systems and bridges will get $2.5 billion in repairs and upgrades.

The federal Transportation Department “plans to open competition for the first round of port infrastructure grants funded by the bill within 90 days, as part of a broader effort to ease supply chain bottlenecks slowing down the delivery of goods.”

The question is – how fast will these dollars translate into employment? I’d say next summer we will see a noticeable impact as plans that are already under development get funding commitments.

$2.1 trillion boost of public infrastructure spending over a 10-year period, to the levels (relative to GDP) of the mid-20th century, could add as much as $5.7 trillion to the U.S. over the next decade, creating 2.3 million jobs by 2024 as the work is being completed. 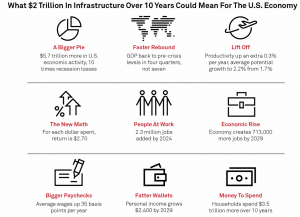 The Act is about $1.7 trillion in spending, so we’re looking at about 1.9 million jobs.

Of course, that is an estimate – it could be higher or lower. However, there’s no question workers’ comp will see:

Prepare for some much-needed growth.