Yesterday we went through the first 5 of my predictions for 2021, today we’ll wrap up the second batch before I attempt to predict what 2022 brings. 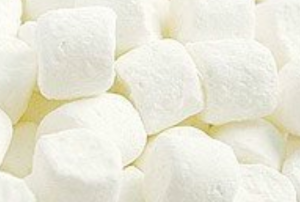 Here’s a few reasons why.

Verdict – False. There are anecdotal stories about a few reductions here and there, but nothing big except…Reports indicated AIG “transferred” employees  – apparently primarily claims staff – to Gallagher Bassett as part of its move to offload fixed costs.

Where I really went wrong was predicting TPAs would have layoffs…Since TPAs’ biggest growth is coming from carriers offloading work to them, and if carriers are laying off staff, then the work has to go somewhere – and that “somewhere” is to TPAs. So, that was an unforced error.

8. Other than presumption and tele-services, there will be very few significant moves in WC regulation or legislation.

Between drastic reductions in state revenues due to sales and other tax receipts affecting staffing and state legislatures and governors all-consumed by COVID responses and budgetary issues there’s little oxygen left to fuel any material changes to work comp regs. While it would be great to see Florida’s legislature stop facilities raiding workers comp to make up revenue shortfalls, that’s highly unlikely.

Verdict – True. And there wasn’t much in the way of presumption or tele-services changes…no, a few states addressing medical marijuana is NOT significant.

9. OneCall will be sold and/or broken up

While the current debt load is a LOT less than it was under the previous owners and the current CEO is an improvement, the decline in claims hit One Call hard in 2020.   The first half of 2021 won’t be any better with employment numbers and claims counts likely reduced due to the pandemic.  On the plus side, there’s still lots of investor money looking for deals.

Net – I expect the company to change hands this year. Whether it is sold as one entity or broken up is TBD.

Verdict – False. That said, it’s just a matter of time…the bleeding has mostly stopped, but growth is anemic at best, service levels remain suspect, and financials have gotten better in large part due to lots of expensive staff exiting the company

10. Opioids and other dangerous drugs will get a lot more attention.

With COVID dominating everyone’s calendar, workload, thinking and energy, we all dropped the ball on managing opioids. That will change.

chart below is from The Economist. 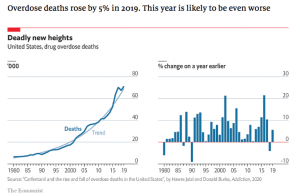 With prescription volumes, MEDs, and duration likely up during 2020, expect payers to re-engage with prescribers, PBMs, and employers to get things moving in the right direction.

Verdict – False.  NIOSH published a timely report on opioid issues among construction workers but other than that – very little material action.

This is REALLY disappointing. I get that COVID was a lot to handle, but the opioid crisis got even worse last year with a record number of opioid-associated deaths. That, and the fact that long-term usage of opioids is likely the most significant contributor to claim duration and long-term claim cost should have insurers, employers, and TPAs focused on addressing chronic opioid usage.

Gotta do better than that.