Again my fascination with the minutiae that brings defeat or victory causes me to diverge from managed care stuff to dive into what’s happening in Ukraine, why, and guess what the end result will be.

The damage Russia is doing to Ukraine and the Ukrainian people is immeasurable.  Yet it pales in comparison to what it is doing to itself, its future, its world standing, its economy . And it will get worse, because

Ukraine is still winning (or perhaps more accurately Russia is not, which is the same as Russia losing), and

The western world is unified as it has never been.

First, the no-fly zone. Unfortunately this is a no-go because:

Also, we (NATO, that is) are about to send some very capable ground-to-air missile systems to Ukraine, systems which Ukrainian soldiers are likely familiar with and will need little additional training on. Some of these systems have the ability to shoot down cruise missiles as well as planes and helicopters.

the contrail is from a Ukrainian rocket about to hit a Russian attack helicopter.

and here’s the helicopter as it hits the ground.

Second, “we should be doing more to help the Ukrainians” Well, like what?

I’m also guessing our intelligence services are helping a LOT by sending data on Russian military movements to Ukrainian forces, data that those forces use to target precision munitions, identify potential threats, and better understand the tactical situation. Of course you’ll never hear about this.

[note more than two dozen (!) Republican Senators voted against legislation providing $13.6 billion in additional aid to Ukraine, then blasted the Biden Administration for “not doing more” to  help the Ukrainians.]

Okay, here’s what I’ve learned from untold hours of reading twitter feeds from some very well-informed and knowledgeable posters…

Russia is having logistical problems – for we civilians, that means their supply chain is in very bad shape. If we don’t get our drill bits, Etsy order, or several pair of shoes to try on, that’s a tragedy.

If an invading army runs out of artillery shells, food, medicine, rockets, medical supplies, and most importantly – fuel – it’s much worse. Hard to fight a war if your:

Which appears to be happening.

There are reports that Putin has been asking China for food, artillery shells, medical kits, and probably everything else. (That’s why President Biden told Premier Xi Jinyang – in no uncertain words – to NOT send military goods to Russia) 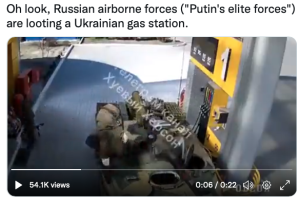 Its mud season, and melt season, which means many roads are impassable which forces vehicles to go cross country – which means crossing streams/rivers. Armies have specialty vehicles intended to do this, but… 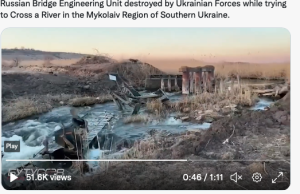 As we discussed a while back, vehicles require roads, which are narrow, can be mined, and offer lots of opportunities for the Ukrainians armed with man-portable rockets to blow them up.

Which seems to be happening.

2. Those fancy hypersonic rockets Putin is using? he doesn’t have that many. And they cost about $100 million EACH. Using them now – against a nation that should have surrendered weeks ago, may be an indicator of desperation.

He’s actually been forced to use anti-ship rockets against land-based targets. Which implies he’s running out of regular rockets. And artillery shells. and lots of other stuff. 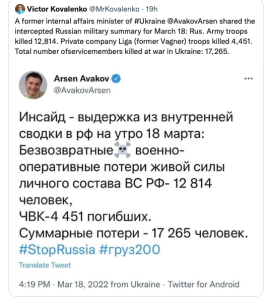 Typically, for every killed-in-action (KIA) there are three wounded (WIA). If this holds here, we’re talking over 50,000 additional casualties.

By way of comparison, in 9 years in Afghanistan – a brutal war indeed – the Soviets lost 9500 KIA.

So in less than a month the Russians may have almost twice as many KIA than in 9 years in Afghanistan.

“Worst” because many of those soldiers were conscripts with little education, poorly fed and trained, unaware of where they were going and why, but told they would be welcomed with open arms.

Where do we go from here?

Where does this end up?

Please consider a contribution to Care. Care is a very reputable and highly effective NGO with a rich history of successfully mitigating disasters and helping people. They are doing great work in Ukraine.