Becker’s reported last week that so far this year hospital and health system margins (with some very notable exceptions) are pretty crappy – down almost 12 percent month over month in February, and a whopping 42% below February 2020 (jsut before COVID).

My bet is significantly higher staffing costs are a major contributor; the giant Henry Ford system said labor costs were up 8% in February over the same month in 2021; Providence’s increase was even higher at 10%.

Couple that with a steep drop-off in health insurance coverage as COVID-related medicaid coverage ends, and you can expect facility costs to jump.

Medicaid is likely the single largest payer today, with about one out of every four of us covered by Medicaid. 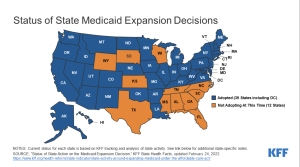 The problem will be especially acute in states that have not expanded Medicaid – if your members/insureds/injured workers are in the orange states, you’ve already been paying a hidden tax to help pay for uninsured care delivered by hospitals.

Since states can pretty much determine who gets Medicaid, the problem is even worse in places like Mississippi that have long restricted Medicaid coverage to a very thin slice of the poor.

If you make more than 27% of the federal poverty level, you’re too rich to get Medicaid in Mississippi – which is both the poorest and sickest state in the nation.  (kudos to Louise Norris for her intel on the issue)

Success favors the prepared. If you think you’ve got an answer to this you’re likely wrong.