Work comp is still way over-priced, incredibly profitable, and the industry – defined as total revenues – is a lot smaller than it appears.

Those are my key takeaways from NCCI Chief Actuary Donna Glenn’s presentation just completed in Orlando (ed note – this was supposed to be distributed yesterday, but I missed the 10 am cutoff time)

I’m not at NCCI due to other client needs, but the fine folk at NCCI have provided a media feed – thanks Cristine Pike and Dean Dimke…

(Note NCCI has included data from most but not all states and payers; thus I suggest you pay more attention to overall trends rather than specific figures)

Premiums for private carriers were up just a bit last year – less than 2 percent.  Not a surprise as COVID was still rampant although shutdowns weren’t as prevalent…and employment was way up in 2021 compared to 2020. 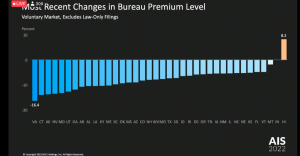 Overall, premium rates dropped significantly last year – continuing what has become a 9 year trend. The drop was driven by a decrease of one-third in losses, almost all of which was offset by a 28% increase in payroll. Interestingly “rate loss cost departures” i.e. discounts – have grown significantly over the last few years. See the para below for my reasoning as to why this has happened… 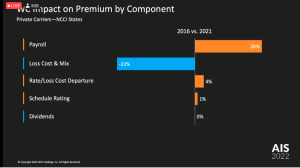 Combined ratio was 87 – again a hugely impactful continuation of 8 years of underwriting gains. WC – which used to be marginally profitable – continues to be a huge profit producer – which is why those “loss cost departures” i.e discounts – are growing. Insurers know how profitable work comp is, and know they can make bank even if they drop their rates.

Even better, NCCI projects accident year combined ratios will improve over time for 2020 and 2021… in contrast to reporting carriers’ initial forecasts, NCCI believes ultimate losses will be much lower. (the blue shaded areas above reflect NCCI’s predicted final loss ratios; the grey reflect carrier’s initial predictions and current predictions.)  One can see that carriers’ predictions have consistently been much higher than their final loss ratios – and there’s still more room to decline.

Not surprisingly carriers released a shipload of reserves last year – this reflects the disparity between what they initially report compared to what losses ultimately totaled. NCCI predicts there is more favorable development to come – as in a LOT MORE.

That said, NCCI indicated reserves are still $16 billion too high.

I’d suggest that Ms Glenn’s terminology while directionally accurate, is burying the lede.