The net – Russia is in deep trouble, so deep that its collapse may well lead to regime change.

Ukraine has retaken over a thousand square miles of its territory in the past few days.  In the process it has captured hundreds of vehicles, Russian locomotives and rolling stock (freight cars etc), thousands of Russian soldiers, and untold quantities of ammunition and supplies. 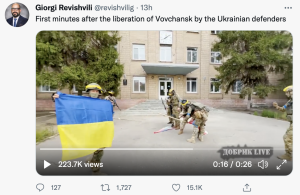 First minutes after the liberation of Vovchansk by the Ukrainian defenders; Russian flag comes down, Ukrainian goes up. 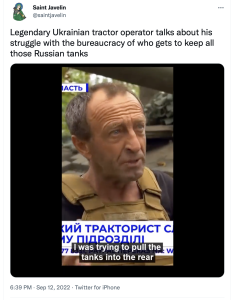 you gotta watch this video of a Ukrainian farmer…he’s complaining there are dozens of abandoned Russian tanks but he doesn’t get to keep any…:(

You won’t find much support for that prediction (Russian military collapse) in your usual news feeds, but hear me out. (my past discussion of Russia’s invasion of Ukraine is here)

The net – Russia is in deep trouble, so deep that its collapse may well lead to regime change. Meanwhile, Putin is celebrating the biggest Ferris Wheel in Europe…which promptly broke down a day after Putin’s speech.

Hang in there.  Ukraine deserves your support.