Lots happened this week while I was hunting, driving, and finishing up the annual survey of pharmacy management in work comp.

“Lying once can be contagious. It can pave the way for lying again in other interactions or negotiations with people at other companies.”

The brief article is intended to provide guidance to buyers, but sellers would do well to internalize the researchers’ observations.

Health spending in the US is almost twice (as a percentage of GDP) as high as other developed countries’. 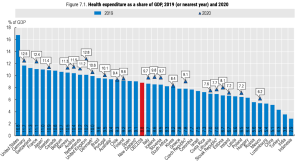 The graph is here if the pic above is hard to read.

Which means far fewer dollars to spend on wages, R&D, IT investment, and stock dividends – and much higher taxes to pay for civil servants’ health benefits.

Oh, and costs zoomed up in 2020 and 2021 due to COVID…due in large part to staffing shortages and concomitant labor costs.

Next time someone starts comparing US healthcare to those with national systems, ask them if they have any idea how much more money we spend than those “socialists” do.