Last night, Ukraine President Volodymyr Zelenskyy spoke to both Houses of Congress, both parties, and all of us.  He spoke eloquently and passionately, describing the suffering of his people and their total commitment to defeating Russia and reclaiming all Ukrainian lands stolen by Putin.

What Zelenskyy knows – and I mean KNOWS – is the more Putin bombs Ukrainians, the stronger those Ukrainians become, and the more committed they are to seeing this through to Putin’s bitter end.

Net – Putin’s attack on civilian targets will strengthen Ukrainian resolve, not weaken it.

I had long thought that the horrific bombing campaigns of World War II helped bring the war to a close by battering Germans and Japanese into submission. [full disclosure – my father was a machine gunner, bombardier, and armorer in the 8th Air Force in England during the second World War.]

Boy was I wrong.

Credible research indicates German production actually increased during the war; while it didn’t reach planned levels (which were likely overly optimistic) it did exceed pre-bombing campaign volumes. Research by the US Strategic Bombing Survey came to the opposite conclusion, however there’s a) big time confirmation bias and b) no evidence that the Survey captured civilian morale data.

the Germans gained nothing from their investment in bombing British civilian targets as part of “The Blitz” (1940-41). Before “The Blitz”, they may not have been happy about having their air force destroyed by the Nazis, but they were also not eager to put their lives on the line to support a hereditary aristocracy that just over 20 years earlier had wasted a substantial portion of a generation of young men in a senseless war. However, as their homes were being destroy and their neighbors killed or wounded by German bombs, ordinary British men and women did not all rabidly support Churchill’s exhortation, “We shall never surrender“, but they continued to work, and they took action to ensure that essential services were provided when their official leaders failed to do so. 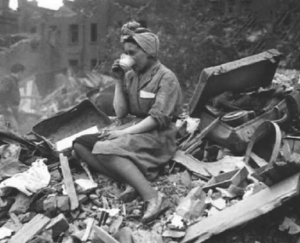 long as I get my cuppa tea, dearie…

TO be sure, this was NOT the whole story; there were many instances of looting, bigotry and finger-pointing, panic and social conflicts. That said, definitive research into civilian morale during the Blitz found the bombing produced:

a people who became actively committed to the project their leaders put before them, who cooperated with the drastic re-ordering of daily life that this entailed, and who, on the whole, did so in a spirit of stoical endurance that did not exclude good humour’. [emphasis added]

Further research on the impact of aerial bombing from 1917 to 1999 found:

(1) air power coercion attempts are more likely to work if they exploit military rather than civilian vulnerabilities, (2) the regime type of the target affects the chances of success, and (3) success is less likely if the attacker demands that the target change its leadership. Results show that coercion is more likely to work if the target’s military vulnerability is higher, but higher levels of civilian vulnerability have no effect on the chances of coercion success; that target regime type has no effect; and that success is less likely when the attacker demands the target change its leadership

In his book TRIBE, author Sebastian Junger details how people react to  having a common enemy, using examples from the Serb-Croat war’s effects on teenagers in Sarajevo and data on depression, anxiety, suicide among British citizens during the Blitz…the net is those issues declined rather significantly. Junger concludes that a common enemy draws people together, all working as one to defeat a single threat.

The more support we give them, the sooner this happens and the fewer Ukrainians will suffer and die.