Healthcare  – and more specifically facility-based healthcare – is a very mature industry and – with one huge exception – exhibits all the hallmarks of such…continued widespread consolidation, shuttering of marginal locations and elimination of unprofitable business lines and centralization of core services.

The “huge exception” is margin compression and price reduction. When any other sector matures, competition becomes fierce and prices come down.

Not so in healthcare, where pricing is opaque at best, and more often opportunistic if not downright predatory.

Over the last 70 years, the percentage of hospitals in health systems has grown by a factor of ten. Unusual indeed is the standalone facility. 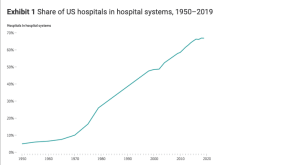 That decades-long trend continued in the 2010s, although the pace slackened somewhat as there were fewer hospitals to acquire. 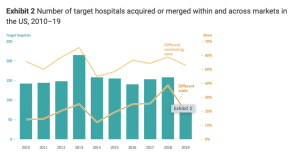 The net is this – most healthcare markets are pretty consolidated, which means one or two systems have pricing power.

Those systems use that power to force ever-higher reimbursement from commercial payers – and workers’ comp.

Facility costs are going up.