There’s lots of news out there about the Congressional Budget Office’s scoring of the Republican healthcare reform bill known as AHCA; we’ll narrowly focus on what passage of AHCA would mean for workers’ comp – and highlight what’s missing from every other analysis of the CBO report.

The expansion of Medicaid and the individual mandate covered about 13 million more workers than pre-ACA; 81% of Medicaid recipients’ families have at least one member working. When workers who have health insurance get hurt, they are less motivated to claim it was on the job. And, if they are hurt on the job, work comp doesn’t have to pay for non-occupational medical conditions (e.g. dealing with hypertension before doing surgery).

The newly insureds are also working in jobs with higher claim frequency than average.

Some argue that the high deductibles and copays common in some insurance plans negates my argument; I respectfully disagree.  That’s because the newly insureds are poorer than average, thus they are much more likely to either:

The CBO has projected: 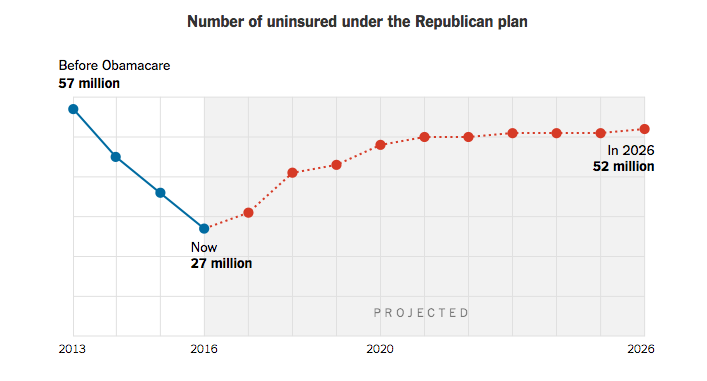 All of these projections are bad for work comp; older workers’ injuries are more expensive, and the higher deductibles and copays, along with a big drop in Medicaid coverage, would financially motivate workers to “claim shift.”

So, those losing health insurance would be:

…from all of the press reports and analyses of the CBO report is a discussion of how providers would react to passage of AHCA. That’s in part because the CBO report (full copy here) doesn’t address the issue.

Insurance coverage is just part of the story; doctors, hospitals, pharma and other providers are going to be hugely affected by a big decrease in their customer base.

More on that tomorrow.