The headlines were comforting – not much change in the number of Americans without health insurance.

Before you breathe that sigh of relief, you’d be well-advised to dig a bit deeper, because there’s plenty of bad news just under the headline.

While the national number of uninsured stayed about the same, that’s irrelevant to you – because healthcare is local. Here’s what I’d be worried about. 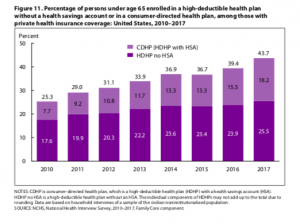 Takeaway – “High” deductible healthplans aren’t much different than no insurance at all if the patient can’t afford the deductible – and over half can’t. So, more incentive to cost- and claim-shift.

Workers’ comp will be affected by the Administration’s ongoing behind-the-scene effort to hollow out the ACA and cut funding for Medicare and Medicaid.