Dr Bob Hartwig of the University of South Carolina gave his annual whirlwind tour of all things economic. The net – his talk was an exuberant paean to the US economy – and the impact of that economy on workers comp.

While he briefly noted several potential issues with the economy, overall Bob painted a picture of businesses investing, consumers spending, profits abounding, and sunshine and happiness all around.

For example, he cited as one reason for the nation’s positivity this datapoint; GDP growth was north of 3 percent for two quarters last year. Well, that’s true. However…

He chose two quarters where growth was over 3 percent – but in reality annual growth was 2.6% last year.

A 2.6 percent annual increase is solid, but by no means a boom.  Bob did cite the high consumer confidence index, small business confidence, and a variety of other factors as support for his overall very positive outlook.

While people may be “confident”, confidence is a state of mind that can change really quickly…and there are dark clouds on the horizon.

For example – wages remain low; consumer debt levels are at historic highs (26% of earnings); the Federal debt and deficit is going to soar, driving up interest rates; and there’s a real risk of trade wars.

If consumers feel strapped and stop buying, things will get ugly. Given the record levels of consumer debt, I don’t see how the buying surge can keep going unless wages increase and interest rates stay low – which isn’t happening.

Bob briefly noted the issue of wage stagnation, but did not discuss the impact of this – and the fact that this is a chronic problem for consumers and businesses. In fact, the financial gains are not going to workers, but to investors and owners…who are less likely to use their newly-gotten tax gains and profits to buy pickups and groceries and movie tickets.

He talked about job openings, specifically the 6 million job openings today – perhaps those jobs are open because employers aren’t willing to pay enough to get people who have left the workforce back in the job market.

He did address the the long-term unemployed, sort of.  Hartwig stated that the number of folks not looking for work is not going to change due to a number of factors (citing the U-6 unemployment rate, which includes those not actively looking for work – slide 17).

Got to admit this was confusing… the overall labor force participation rate, which has been pretty flat since 2014, was often cited by Obama critics as proof that the “recovery” was no recovery at all.  Now we hear that the unemployment rate – which is the inverse of the labor force participation rate – isn’t likely to change. [I emailed Dr Hartwig Monday asking for clarification; haven’t heard back yet but will update the post if I do]

Well, which one is it – will people return to the workforce or not? 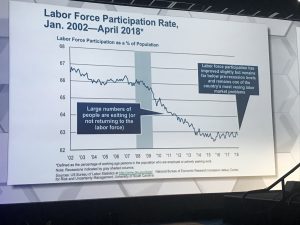 Clouds on the horizon

Not only will interest rates go up (for businesses and the Feds), but a much larger percentage of Federal spending will go to debt service. In fact, we can expect the Fed to increase rates this year.

The data points cited by Dr Hartwig don’t indicate the economy has strengthened appreciably over the last 18 months. Yes, consumer and small business confidence indicators are strong, but they appear to be based not on real economic conditions but on emotion.