After eight days with family in Tuscany, it’s back to work.

Before we dive into the mundane, an observation from my travels. 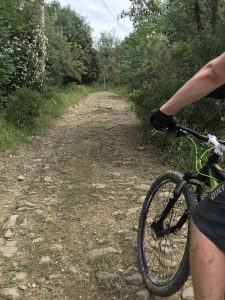 This is a road built by the Romans about 2000 years ago. It’s still pretty functional, as were most of the ones we rode on in the hills and valleys of Tuscany. Sure, it could be smoother and a bit less steep (or a LOT less steep) in places, but it’s still there.

The Romans built these by hand, with nothing but human and animal power, with no electronics or computers or drones or satellite or engineering apps, no internal combustion or hydraulics or steam- or coal- powered machines. And they’re still here.

Somehow, that bumpy, narrow road of stones buried in the dirt eons ago felt a lot more…reliable.

All those opioid bills in Congress

Now we know why Congress can’t get anything done – At last count there were about 30 opioid-related bills in various stages in the House or Senate – over 20 have actually been passed by the House. One of the bills that addresses the Institutions for Mental Diseases is pretty contentious.

According to the Washington Post, the “IMD exclusion”  prohibits federal Medicaid reimbursements for inpatient treatment centers with more than 16 beds whose patients are mainly suffering from severe mental illness. The House bill would lift the exclusion for treatment of opioid addiction- but ONLY opioid addiction.

This ignores the very real and pervasive nature of other-substance addiction that has long plagued poor rural, minority and inner-city populations – crystal meth is just one example.

Why we’d pass a bill that doesn’t address crystal meth, which is a disaster in many rural communities from Maine to Arizona, is beyond me.

But there’s another issue here that’s even more troubling; this bill ignores the real problem; community-based treatment has always been starved for funds, unable to help millions of people who endlessly wait their turn for treatment.

Fact is, many with substance abuse disorder want to get treatment – there just isn’t any available. And allowing Medicaid to spend billions on care delivered in large institutions sounds a lot like a hand-out of taxpayer dollars to big business-owned “treatment” centers.

The IMD exclusion repeal is just window-dressing, a way for politicians to claim they’re doing something while handing billions to an industry with really good lobbying.

The Romans built very expensive and very solid, stable, and durable roads that led to the long-term survival and success of the Empire.

We give truckloads of taxpayer dollars to big business while ignoring the devastation of the rural and inner-city poor.

Where will our decision lead us?

One thought on “Roads to stability”