Things are so bad that despite the ever-climbing death toll, news reports announcing the butcher’s bill manage to sound somewhat positive, citing reductions in deaths in a handful of states. Meanwhile, between 2.1 and 4 million Americans suffer from Opioid Abuse Disorder. 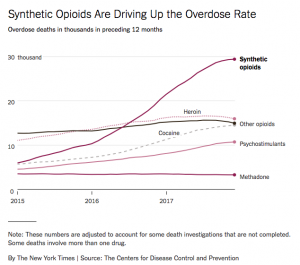 Researchers cite some reasons for optimism; death rates in the west remain pretty flat – likely because the heroin used there is hard to mix with fentanyl…however there’s evidence that the black tar folks are figuring out how to do just that.

The next time someone protests the UR/IMR process, ask them how many more patients have to die from opioids before they accept that doctors need oversight.

One thought on “The Opioid Update”