Well, some posts get a life of their own, and so it is with this discussion of claims frequency and claims counts. After much discussion with colleagues and several back-and-forth emails with WCRI CEO John Ruser PhD about the correlation of OSHA recordable data and work comp claims and why both are declining, I decided the best way to get this to you, dear reader, is via an interview. So, read on.

MCM – I believe that you were responsible for the BLS OSHA-recordable injury data for years. What are a couple key points readers should know about the OSHA-recordable reports?

Dr Ruser – Yes, I was BLS Assistant Commissioner for Occupational Safety and Health Statistics for over 5 years and was a researcher of the BLS OSHA data for many years before that.

While there has been some controversy about the completeness of reporting in the OSHA recordkeeping system (see below), the BLS OSHA-recordable injury rate data are extremely valuable for several reasons.  They are very detailed by State, by industry, by establishment size and by worker characteristics, so that are an important benchmarking tool for risk managers and others seeking to compare their company’s injury rates against their peers.  From the perspective of focusing injury risk reduction efforts, they are important in identifying those groups of workers at higher risk of injury and they are used by OSHA to identify high-risk industries for inspections.  And, with their long relatively-consistent time series and detail, they are a valuable tool for researchers seeking to understand factors that contribute to workplace injuries.

MCM – Where does BLS get the data for the OSHA-recordable reports?

Dr Ruser – BLS’s estimates of OSHA-recordable injuries are based on a very large annual survey of about a quarter-million establishments (that is, specific locations of a company or organization) called the Survey of Occupational Injuries and Illnesses (SOII).  The SOII contains employer-reported data drawn from the OSHA logs that establishments keep throughout the year.  SOII covers non-fatal occupational injuries and those illnesses that can be directly linked to a workplace.  A separate BLS program, the Census of Fatal Occupational Injuries, uses multiple data sources, such as death certificates, OSHA reports and many other sources, to track workplace deaths due to injury.

MCM – there’s been questions about the decline in reportables over the years. Can you comment on these questions?

Dr Ruser – Some skeptics of the declines in the BLS OSHA-recordable injury rates attribute these declines to changes in OSHA-recordkeeping rules and practices or tightening in WC compensability rules, meaning the declines in injury rates are at least in part an artifact of reporting.  External research supported by BLS and other non-BLS-supported research does suggest that the number of injuries captured in SOII undercounts the true number of OSHA-recordable injuries.  (BLS has a very complete webpage on SOII data quality research that you can access here: https://www.bls.gov/iif/soii-bibliography.htm)

But, while the numbers (levels) of injuries and claims may be undercounted, the issue for the observed declines (trends) in injuries (and WC claims) is whether underreporting has grown.  There is little direct research on this.  A study by Washington State comparing SOII data to WC claims found that during the first five years of the study period (2002 – 2006), underreporting decreased, while it increased from 2007 to 2011.  Importantly, the Washington State researchers concluded that the total estimated actual number of SOII-eligible WC time loss injuries decreased over the ten year span, meaning there were real declines in injuries (and some underreporting too).

The Washington State study was excellent, but it focused on one state and a relatively short time span, which included a great recession during the second half of the study period when underreporting was identified.   Another approach to validating the time trends is to compare to other data that should not be susceptible to the concerns raised about reporting.

MCM – what analyses did you do to explore that issue?

Dr Ruser – I compared the SOII data with data from other sources.  First, I looked at how the US injury rate for 3 or more days away from work tracks with the NCCI indemnity claiming rate.  The declines in these two data series track extremely closely.  So, while the OSHA recordkeeping system is technically independent of workers’ compensation, the BLS injury data and the NCCI claims data are telling the same story and the BLS data can be used to try to identify factors associated with the decline in the NCCI WC claiming rate. 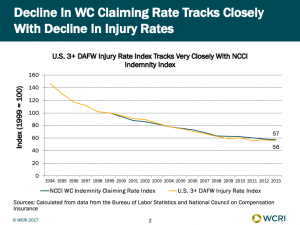 Regarding whether the BLS injury rate decline is real, I created an index of the OSHA-recordable case rate for cases with 3 or more days away from work and lined it up with a similar index for 15 EU countries for injuries with 4 or more days away from work (the series most comparable to the US data).  The chart that is attached shows how similar the trends are in the US and in the EU.  The index was set to 100 for injury rate values in 1998 and the other values in the chart are injury rates relative to 1998.  As of 2014, the US injury rate was 54 percent of its value in 1998, while the EU injury rate in 2014 was 49 percent of its value in 1998. 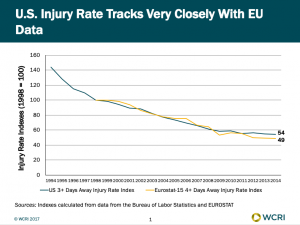 MCM – what does this mean (for our readers)?:

Dr Ruser- The remarkably similar trends in the US and EU data suggest that we need to look beyond US-specific explanations (such as OSHA-recordkeeping rules or WC compensability rules) to understand what is responsible for the long-run aggregate declines in injury rates and WC claims rates.  While there may be some changes in reporting at least over part of the past quarter century, the good news, I believe, is that there has been a remarkable improvement in safety and this improvement is seen in most industries and in many developed countries.

6 thoughts on “Workers’ comp claims, OSHA reportables, and why both are dropping”