in which I attempt to summarize recent research into workers’ comp and medical management and describe what it means for you.

Thanks to Elaine Goodman of WorkCompCentral, we learned this morning that folks who consumed marijuana during recovery from an injury were likely to use more opioids  – for much longer – than individuals who did not use marijuana.

Implication – This calls into question the idea that marijuana use reduces opioid use.

California’s WC Insurance Rating Bureau reported premium rates declined again in 2018 – they are now down 24 percent over the last four years. The combined ratio is at a very solid 91 – BUT that’s a big jump from 2017’s 85.

Predictions are the number of retail stores, and the jobs in those stores – are continuing to drop. 75,000 more stores will close by 2026 – that’s seven years from now. Sears, Payless Shoes, Gymboree, ToysRUs, RadioShack, GNC are among those closing stores.

Healthcare costs for working families  “rose 27.7 percent from 2010 to 2016…while median household income rose 19.8 percent…” There’s a lot of variation among states. The percentages in the map indicate premiums as a percentage of family income. 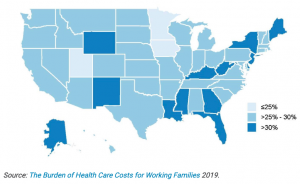 Need to know what states’ work comp UR guidelines are? WCRI’s State Policies on Treatment Guidelines and UM‘s got you covered.

If I missed something – and I’m sure I did – please provide a BRIEF summary and a link in the comments section.

And happy April to all!