Barry Lipton PhD did a quick review of a few ways work comp and group health differ – and how they are sometimes comparable.

The biggest difference is that workers’ comp is very focused on return to work, and more broadly, we care more about functionality.  In group health, not so much.

Differences – other than the obvious e.g. WC=ortho and trauma; group health= everything

This differs by state, with Alabama, Missouri, and Virginia showing the biggest cost difference compared to national averages, and Colorado and South Dakota with the lowest cost compared to that average.

It also differs by type of service – not surprisingly physical medicine is used much more in workers’ comp, driven almost entirely by more utilization.

That’s not surprising, as comp conditions are predominantly musculoskeletal injuries and focused on return to functionality, while group health deals with many more conditions and RTW is irrelevant. 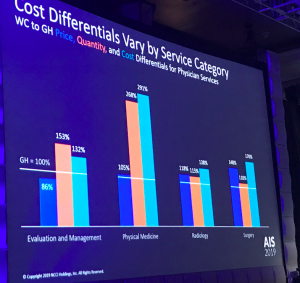 There’s also a big difference in the cost of MRIs… 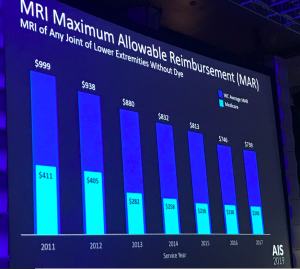 You can see that Medicare pays way less than work comp (WC is blue, Medicare is green-ish). You can also see the impact of Medicare’s change in reimbursement in 2013; it started to really impact workers comp in the years after 2014 as regulators adopted/factored in/used Medicare’s rate for reimbursement in their state.

Price + Utilization = Cost. But one has to factor in RTW in comp, a focus that is nonexistent in group health.