When recessions hit, workers’ comp, healthcare, and healthcare delivery systems are deeply affected. Jobs are lost and so are benefits, claims decrease than increase, injured workers don’t have jobs to return to.

There are some indications that we may be on the cusp of a recession today.

One of the few positive signs, initial jobless claims, remain stable which argues against a recession.

And this from Forbes:

The New York Fed’s recession probability model is currently warning that there is a 30% probability of a recession in the next 12 months. The last time that recession odds were the same … was just five months before the Great Recession officially started in December 2007.

When the model is updated to use current data, the odds increase to 64%. 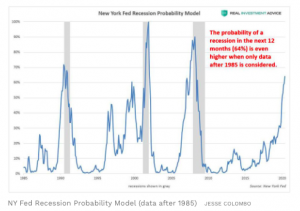 How long will it last?

Likely longer than the Great Recession of a decade ago, for a number of reasons:

There’s another factor that’s both difficult to measure and, I’d argue, much more troubling.

Columbia, Neato Robotics, Wolverine, John Deere, and Caterpillar are all hamstrung, unable to predict what their supply chain costs will be, how tariffs will affect the price of their products, and what sales will amount to. As a result, they’re hunkering down; Moody’s estimated 300,000 jobs have already been lost due to Trump’s trade war.

We’ve already seen the Chinese shift agricultural purchases from the US to Brazil. This has hammered Deere and Caterpillar, as well as their local dealers, and the manufacturers that make up their supply chains.

Watch indicators very carefully, be objective and rational, and remember that fortune favors the prepared.

The good news is those who are clear-eyed and thoughtful can do well; for work comp businesses, remember: