The takeaway from the American Hospital Association’s “study” of hospital mergers is NOT that mergers are good for patients, employers, and taxpayers.

It is that all of us should be skeptical readers of research conducted/paid for by entities that have a stake in the results.

The report authored by Charles River Associates – and funded by the AHA – on mergers and acquisitions in the hospital made several claims, all focused on the hospital that was acquired:

Clearly the intended message is that mergers are good for us – quality goes up and the cost to us – the patients and employers and workers comp insurers, go down.

First, the study drew conclusions directly contradicted by every other study of hospital/health system consolidation.  This is likely because the study focused on the hospitals being acquired, and not the overall results of the newly merged entity. (Here is a very good review of mergers’ impact on costs and quality, here’s what NCCI had to say.
And here’s what happens to patients – spoiler – you get to pay more.
Oh, and here’s yet another showing hospital costs for private payers are stupid high.
If the authors had included results from the acquiring hospitals this would have been much more useful.  Overall, the report provides no useful insights into the changes in costs, revenues, or quality resulting from mergers.
Second, the study reported expense reductions from mergers are relatively small at 1.5% to 3.5% of total expenses. As I mentioned to WorkCompCentral’s Elaine Goodman, most every merger outside the hospital industry produces expense savings at or very close to double digits, thus the “cost-reduction” benefits touted by the AHA are rather less than impressive.
Second, claims about improvements in quality of care are not convincing for two reasons.  First, statements about types of improvements consist of examples cited by interviewees. Second, as the acquired hospital may transfer, or more likely, not accept higher-acuity patients, it is not surprising that their quality measures (re-admissions, mortality rates, etc) improve. Healthier patients = better quality ratings.
Third, the report indicates ” acquisitions are also associated with a reduction in net patient revenue per admission “ at the acquired hospital. There could be many reasons for patient revenues to decline, including moving more critical patients  – who cost more to treat – from the acquired hospital to the acquiring hospital. Changes in Medicare and Medicaid reimbursement could also be a factor. Notably the report did not discuss revenue reductions across the newly merged entity.
Here’s what REALLY happens to hospital revenues… 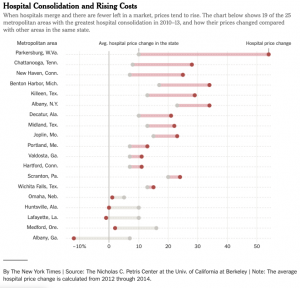 What does this mean for you?
For workers’ comp payers, don’t think this is good news..
Hospital costs are hurting workers’ comp payers.  Revenue maximization efforts by hospitals and healthcare systems in non-Medicaid expansion states, are driving comp medical costs higher.

Note – For years I have been doing research on several issues important to work comp – pharmacy, bill review, claims systems, utilization review. Some of have been sponsored by companies active in the space – but they’ve never had access to respondent-specific data nor any input into the analysis or report writing process.

2 thoughts on “No, hospital mergers do NOT reduce your costs”