Today’s WorkCompCentral arrived with William Rabb’s report on the use of opioids by workers’ comp patients in Louisiana. [subscription required]

For some reason, some “claimant attorneys” don’t see the wisdom of formularies/guidelines intended to reduce inappropriate opioid use, citing spurious claims from the pain industry in attempt to validate their complaints.

Louisiana has had treatment guidelines in place for several years, however they have not been revised or updated in memory and are very difficult to enforce. Compared to other states, the Pelican State has made little progress reducing inappropriate opioid use by work comp patients. 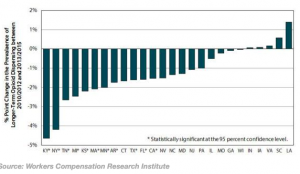 Back in 2017 I cited Sheral Kellar, Director of Louisiana’s Office of Workers’ Compensation Administration discussing the opioid issue in her state.

Ms Kellar knows a formulary is NOT a panacea, rather a critical tool in the armamentarium which includes:

Over the last decade I have spoken with many individuals heavily involved in Louisiana workers’ comp; each frustrated and saddened by the lack of meaningful progress in attacking the overuse of opioids by workers’ comp patients.