That’s the question many have asked when told a handful of California physicians file most of the UR and IMR requests. Who are the 122 docs who file 44% of IMR disputes?  The ten physicians responsible for 9.5%? And what are the results of those filings?

Normally when regulators institute UR and associated appeals processes, there are a lot of UR appeal requests in the first few months, after which the volume drops off dramatically.  As providers learn the guidelines and understand the process, they change their practice patterns to comply with those guidelines.

This has been the pattern for decades, ever since UR started with hospital pre-auths in California in the early 1980’s.

Workers’ comp is no different, as the same trend occurred when Texas implemented guidelines and UR, and other states as well. For those wondering how this could be, a few reasons are provided below, courtesy CWCI… 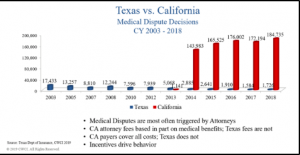 Things are certainly different in California, where the volume of UR filings and IMR appeals actually increased by about 30% in the years since adoption. This makes no sense, as 9 out of 10 times a doc files an IMR appeal, that appeal is rejected. This adds millions of dollars to employers’ and taxpayers’ costs, extends disability, and slows down the patients’ recovery process. [of course, most of these UR/IMR requests are filed by applicant attorneys, based on the treatments are prescribed by physicians) 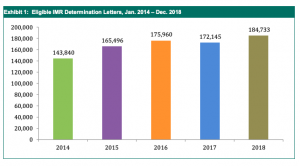 Till now, the top offenders, the docs who don’t want to comply with evidence-based treatment guidelines, the ones who slow down the recovery process by continually requesting inappropriate drugs, unnecessary surgeries, unneeded injections and unproven therapies have been able to hide behind a wall of anonymity.

That’s over; SB 537 is why you’re about to find out who these bad actors are.

From the Senate Analysis of the bill:

Recent research from the California Workers’ Compensation Institute suggests that medical disputes in the workers’ compensation system are not widespread: rather, they are uniquely concentrated among a few providers. For example, in 2015-16, the top 1% of providers who filed IMR requests (97 providers) filed twice as many requests as the bottom 90% of providers (approximately 40,000 providers). [emphasis added]

the strict protections on the use of individually identifiable information means that it is likely illegal for the DWC to reach out to these providers and find out why there is such a concentration of medical disputes among such a small provider group. SB 537 will address this concern by implementing the same data reporting requirements as are in the federal Medicare system.

DWC is tasked to do this on or before January 1, 2024; sources indicate DWC will likely publish data well before that date.

And when it does, we’ll know the name of the PM&R doc in northern California who filed IMR requests resulting in 2,800 IMR letters and 4,441 Medical Decisions. Oh, and 85% of those appeals were rejected. For those keeping score at home, that’s 11 letters per working day.

Employers and insurers, make darn sure your MPN is on top of this.