The LA Times’ Patrick McGreevy penned a piece on California’s State Fund – one that I contend is highly misleading. 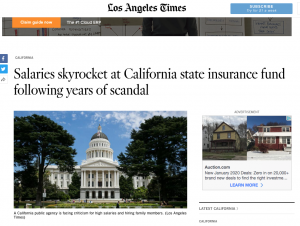 McGreevy – and his editors – did their readers a disservice when “reporting” on executive compensation at the State Compensation Insurance Fund of California, focusing only on complaints about compensation and unsubstantiated claims of nepotism. Fact is, under CEO Vern Steiner, the State Fund has made a remarkable turnaround, one that has literally and figuratively paid dividends for businesses and taxpayers throughout the state.

McGreevy failed to mention anything about the Fund’s 2019 performance ($160 million in dividends paid to policyholders while significantly strengthening reserves) – performance he knew about before he wrote his piece.

Here’s an example of McGreevy’s reporting; an uniformed – at best – comment from one so-called “former industry executive”:

“It’s a very cushy gig…They don’t do much of anything and they get paid a ton.”

[Oh, and the guy who said that worked for a not-for-profit insurer – USAA – that paid it’s CEO 5 times what State Fund CEO Vern Steiner made. And the State Fund had a MUCH better year.]

But about that comment; specifically “they don’t do much of anything”.

I called Steiner to ask how the State Fund has delivered those results. Here’s what he said.

MCM – Talk about the Fund’s financial performance.
VS – ” [We] went into this year knowing that the Fund’s financial strength was exactly where California needed it to be to handle the market no matter what comes. Reserves are very strong; surplus is what we need to withstand any catastrophe; biggest risk is significant negative reserve development from unexpected system changes – we can handle this.”

MCM – What are the factors that drove this?
VS – There have been several transformative initiatives at the Fund, largely driven by claim performance and investment performance.

This could not have happened several years ago. A few years ago the State Legislature authorized additional executive positions at the Fund and allowed the Fund to invest in equity. We hired a Chief Investment Officer, and the equity investments have generated much more in unrealized cap gains. Our state insurance code only allows us to invest 20% of unrestricted surplus in equity; as our equity portfolio increased in value, it exceeded that 20%, so we had to sell off equity to get under 20%. This happened several times in 2019, creating a large capital gain. We didn’t need this money for surplus or reserves and we are not for profit, so we are giving them to our policyholders.

Since we were given the authority to invest in equities we have generated $433.8M in capital gains.

MCM – Has the Fund’s medical management of claims affected results?
VS – “The Chief Medical Officer position was also created by the Legislature. After Dinesh Govindarao came on board we created a comprehensive approach to the opioid epidemic; the work that was started in 2013 is impacting reserves for claims going back to 2008.  About $60 million dividend is from claims improvement…[there] may be as much as several hundred million more in dividends from our opioid initiatives alone.”

“After the Palm Medical case, we had not removed any physicians from our previous network, so we closed it down, rolled out a new network in 2016, and did not include physician offices in our pharmacy network.  That had a massive impact on lowering claim costs and reducing inappropriate compound medicine and opiate prescriptions.”

VS – “When the Chief Claims Officer joined at the end of 2015 we redesigned the claim model to move the 1/3 of open claims that were from early 2000s to a dedicated group of adjusters specializing in resolution. We had (received) a million claims over a 5 year period [this happened back when the California work comp system was in crisis and the State Fund had over 50% market share]

In 2015 a third of our open claims inventory was from that period, managing these claims was taking a lot of attention away from focusing on the 20,000 new claims we get every year. We separated the old and new claims, have different people working those and as a result we are closing claims at faster rate than ever and this continues to improve.”

The result of all these people in “cushy jobs not doing much” is a State Fund that’s:

Kudos to the State Fund for delivering remarkable results for patients, policyholders, and taxpayers.

Note – I emailed Mr McGreevy early today asking for an explanation as to his article didn’t include information re the improvements in financial and claim outcomes. If he responds I will keep you posted.

One thought on “This is why media gets a bad name.”