Apologies for the dearth of posts; vacation and slammed with client work.

Went bike-packing last week in the wilds of Pennsylvania and Maryland – had a great time off the grid, camping out, solving world problems around the fire at night.

Here’s a quick update on what I missed.

the great re-opening…or, what scares the bejesus out of me.

About 25 million people that can’t work remotely are at high risk if they contract COVID19. So, they a) have to go to work, b) many take public transportation, and c) are at high risk due to pre-ex conditions and poor health. This does not bode well for states experiencing increases in COVID19 cases.

Many states appear to have decided the healthcare implications of opening up outweigh the economic and societal costs of staying closed.

Florida is one such state: 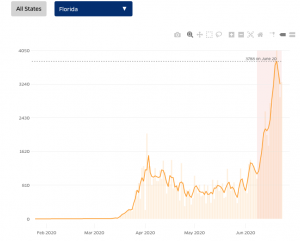 This from JHU’s site.

Here’s a snapshot of positive tests, go here to get data on your state. The graphs show case counts from January thru yesterday; the greener the background the steeper the decline, the redder the steeper the increase. 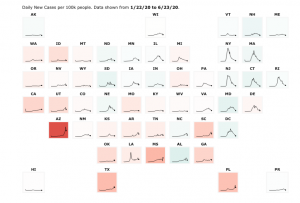 Hospitals in seven states are in danger of being overwhelmed with new COVID-19 cases as fatalities increased yesterday for the first time since June 7. 33 states and territories have a higher rolling average of cases yesterday than they did last week.

Meanwhile the Federal government is scaling back its support for testing in 5 states.

As I noted in an earlier post, the biggest impact on workers’ comp will not come from COVID19 itself, but rather the dramatic drop in employment, business failures, and payroll.

According to NCCI, job losses peaked a couple months ago and employment has recovered somewhat…however there is wiiiiiiide variation across states, with some states as low as 8% unemployment and others up to 20%.

Remember the PPP dollars run out in a week, and when those $$ disappear, employers who had to keep workers on payroll to qualify for PPP won”t have to keep them “employed.” So, watch the unemployment numbers for early July closely.

Insiders are expecting a big increase in the number of corporate bankruptcies driven by way too much debt, changing buyer tastes, and of course COVID19. My take is COVID19 will accelerate the jump in bankruptcies, but the underlying drivers are the root cause; lots of debt works great…until it doesn’t.

The term for companies that are having big problems covering their interest expense is “Zombie”, signifying an entity that is dead but still stumbling around. About one out of five publicly-traded companies earns this sobriquet. 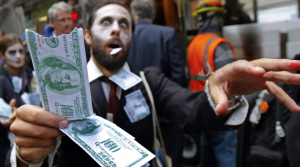 Stay tuned to reports on unemployment and payroll changes in July. If the numbers aren’t good, the implications are broad and deep.

One thought on “COVID catch-up”