Trump said it was a “tremendous” number.

“We saw about a 35 percent better survival in the patients who benefited most from the treatment, which were patients under 80 who were not on artificial respiration…I don’t want you to gloss over this number…We dream in drug development of something like a 35% mortality reduction. This is a major advance in the treatment of patients.”

“a 35 percent improvement in survival is a pretty substantial clinical benefit. What that means is — and if the data continue to pan out — 100 people who are sick with covid-19, 35 would have been saved because of the administration of plasma.”

This is not “stretching the truth”, or over-generalizing, or taking something out of context.  It is total bullshit.

A REAL FDA scientist – whose name was redacted from an FDA memo, was a LOT less enthusiastic, writing the study data:

“support the conclusion that [convalescent plasma] to treat hospitalized patients with COVID-19 meets the ‘may be effective’ criteria for issuance of an EUA. [emphasis added; EUA = emergency use authorization, which allows use of a treatment before it goes thru the entire approval process]

There is no basis or source for the 35% figure; it appears to have been derived from a very small group of patients treated at the Mayo Clinic.

Note the emphasis on “appears”; that statistic was NOT in the Mayo Clinic’s 31 page report;

If anything, it looks like Azar, Hahn, and President Trump cherry-picked data by only looking at results from a very select and very small subset of a subset of patients; those:

Here’s what the study actually found as reported by the NYTimes:

among the larger group of more than 35,000 patients, when plasma was given within three day of diagnosis, the death rate was about 22 percent, compared with 27 percent when it was given four or more days after diagnosis. 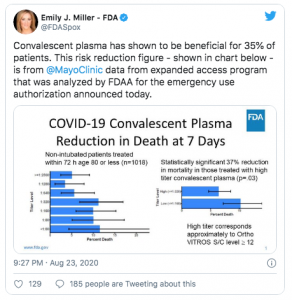 I get we all want to find a cure, and a vaccine, and we want this long global nightmare to end. We want the dying to stop, the suffering to end, the pain to go away, life to return. But our only hope is rigorous, robust, careful and thorough science.

Not political grandstanding, not abuse of a vitally important Federal Agency, not outright lying. We’ve been down this path before, and it didn’t turn out well.  Remember hydroxychloroquine?

Is it a universal cure?

Science matters. Dig deep, ask hard questions, and don’t believe the headlines until you do your homework.