A panel discussion on the State of the Workers’ Comp System featuring Alan Pierce, David Langham, John Ruser and Bruce Wood closed WCRI’s 38th Conference. The discussion was spirited, there were significant disagreements all handled with respect and courtesy – take a lesson, Washington! 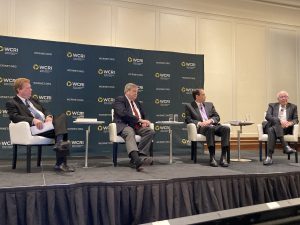 There’s no question the “system” is way better than it was fifty years ago when the National Commission’s report was published…the panelists disagreed on how much “better” it is – among other issues.

Unfortunately what was not addressed in any detail was the state of the “system” today, rather the panelists focused mostly on how we got here. That was a miss, although my bet is Dr Ruser just ran out of time.

Alan Pierce JD opined [paraphrasing here] that all cost cutting efforts came at the expense of the injured worker, citing changes in Massachusetts’ reduction of benefits in the 90’s and other events. He also noted that issues related to compensability of injuries incurred by older folks with degenerative conditions are increasing, often to the detriment of the injured worker. Pierce is a passionate worker advocate with deep experience, albeit in one jurisdiction – Massachusetts.

Pierce asserted this has happened in large part due to the decline in organized labor and increased political power of employers. Unfortunately Mr Pierce went way over his allotted time, reducing other panelists’ time and robbing the audience in the process.

After Mr Pierce completed his soliloquy, Bruce Wood weighed in.  Bruce noted many states adopted key recommendations set forth by the national commission, then the work comp market collapsed around 1990, creating an “existential crisis.”

Bruce noted the industry was in such dire financial shape that state regulators adopted measures to address the largest cost driver in comp — permanent partial disability. He also challenged Pierce’s characterization of the industry’s prior acceptance of paying for care for aging-related conditions, citing changes in specific states to address that issue, changes that Bruce stated were necessary to help regain financial stability.

David Langham – a workers’ comp judge in Florida – criticized the production of the National Commission’s report, averring that the report was limited due to time constraints. Langham noted there needs to be a balance and legislators/regulators seem to make changes that are weighted too far towards employers or employees. Langham called for legislators to focus on getting things back in balance, noting few or no injured workers are involved in the legislative process, nor are any smaller  – or midsized employers for that matter. Kudos to Judge Langham for keeping to his allotted time.

Asked about the role of the Federal government, Pierce suggested perhaps there should be a set of minimum standards for worker benefits states should comply with…then noted this might become the de facto universal standard, thereby the “floor” becomes the ceiling.

Langham noted the public doesn’t have much faith in the Federal government, but failed to point out why that is the case – which I would argue is caused by two factors:

Wood noted that the last time Congress addressed any of the Federal programs was 1984…I would note that this is NOT the fault of those programs, but rather the responsibility of Congress.

Which, frankly, has not done its job.

Change has to be driven by stakeholders.

Injured workers may well see a need for change, but their intentions and desires are often co-opted by profiteers cloaking their insatiable thirst for yet more dollars in the guise of “helping workers.” I’m looking at you, mail order pharmacies masquerading as advocates…

Physician dispensing accounts for half of all drug spend in several states – yet delivers zero benefit to injured workers and sucks hundreds of millions out of employers and tax payers.

Many – but not all – hospitals in Florida are absolutely screwing employers and taxpayers, yet legislators and regulators in the pocket of the hospital industry aggressively resist any attempt at reform. Meanwhile, Florida’s doctors get paid less to treat work comp patients than their fellow physicians in pretty much every other state – and those same legislators and regulators do nothing.

I ran into old friend and colleague John Swan on the way out of the hotel (btw I LOVE the Westin Copley Square – great service, terrific gym, wifi works).

John said something we – and I – need to ALWAYS remember – the only people with “standing” to work on policy and interact with legislators are workers and employers.