With all the attention paid to abortion these days, I thought it worthwhile to dig into the financial and health impact of abortion and childbirth.

Women who give birth incur about $19,000 in additional healthcare costs compared to women who don’t. 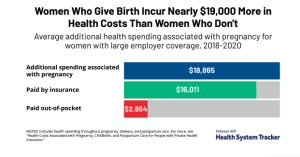 And that’s for women covered by large employers’ health plans.

Lower-income adults in the South and/or in states that have not expanded Medicaid are much more likely to have medical debt than the rest of us. 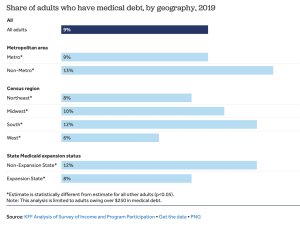 About 13 million of us will see their health insurance premiums jump in January unless Congress acts. The issue is subsidies for lower-income folks who get their insurance via the Exchanges will expire at the end of this year unless they are extended. So far, the chances for an extension don’t look promising.

States that have or are likely to ban abortion are:

If one is going to force people to do things, one should understand and be responsible for the consequences.