CMS Administrator Seema Verma said last week that “Medicare for All would become Medicare for None.”

Verna said – and I quote:

A) “By choosing a socialized system, you are giving the government complete control over the decisions pertaining to your care, or whether you receive care at all.”

Uh, Medicare’s recipients are pretty damn happy with Medicare’s “government run healthcare” today – much happier than those of us insured thru employers 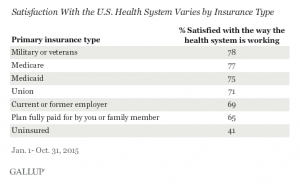 Verna fails to explain how MFA is fundamentally different from Medicare as it exists today – and therefore would somehow become this “government-controlled healthcare” monster.

Her claim appears to be based on unfounded assumptions, namely MFA would be fundamentally and in some ways diametrically different from Medicare. Yet she provides no credible rationale for this assertion, instead using code words such as “socialized medicine” to grossly mis-characterize the proposals for MFA (note I’m not advocating for MFA, as I’ve said before, however I do believe something like it is in our future because the current system is unsustainable)

In fact, the MFA proposals consistently support keeping the core of Medicare the same, just expanding it to include the rest of us.

B) “Rather than straining Medicare, we are working to strengthen Medicare.”

Recall that her boss, President Trump, and the Republicans in Congress proposed a budget that would cut $537 BILLION from Medicare over the next decade. I’m hard-pressed to figure out how cutting over a half-trillion dollars from Medicare will “strengthen” it.

Finally, she says C) “Let’s learn from the mistakes made in Medicaid when the Affordable Act pushed millions of able-bodied Americans into a program designed for pregnant women, children, aged and those with disabilities, only to then incentivize states to serve the able-bodied before protecting Americas most in need.

The ACA did not “push” millions of able-bodied Americans” anywhere. The reality is those “able-bodied Americans” could not afford or get health insurance – it was too expensive, wouldn’t cover their pre-existing conditions, or just wasn’t offered, period. The “free market” failed them – and Verna et al have yet to offer any plans that would help millions of working-classAmericans get affordable health insurance

It also didn’t favor those new Medicaid members over current ones – that’s just not true and is a blatant mis-characterization of the law.

I’ve been waiting for the current Administration’s national strategy/plan to fix healthcare. If this is symbolic of their thinking, we’re going to get MFA sooner than I thought.

9 thoughts on “Are claims that “Medicare for All” will hurt Medicare accurate?”