There are no challenges facing today’s work comp insurance industry.

Profitability has never been this high for this long. 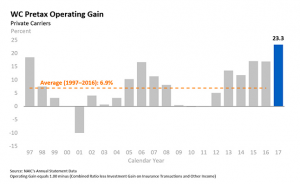 The combined ratio – the cost of claims plus admin expense – is historically low, and getting even better. 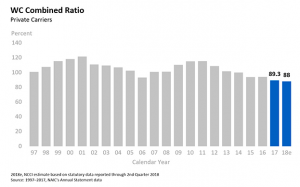 While rates continue to drop, that isn’t hurting profitability.

Employment and payroll is high and appears (to some) to be stable.

Reserves are far beyond adequate, eliminating fears of a major expense shock or premium jump.

All this joy helps squash any whisper of innovation, any fleeting thought of change, any “risky” initiatives.

The work comp insurance industry has never been better, and has never had better reason to see nothing but blue skies ahead.

That is a grave mistake.

While we must pay close attention to potentially disruptive forces that may well significantly alter the landscape, many are too easily – and far too readily – dismissed. It’s analogous to global warming; the deniers long scoffed, protesting that climate scientists were catastrophizing the likelihood of major change, and here we are.

While outright deniers have much to regret, those who sort of knew the climate is changing have done little to prevent it, adapt to it, mitigate it. That’s in our DNA; we humans survived and flourished through our ability to quickly recognize and address immediate threats.

Very long term threats, not so much.

Some of the external forces are obvious, others are hidden. But all should be acknowledged, objectively considered, and, if necessary, planned for. Over the next few days we’ll be digging into these in some detail.

I offer a few for your consideration.

To be sure, some/many of these won’t happen and/or won’t affect workers comp. But it’s likely some will. The time to prepare is now.