So we don’t control healthcare, healthcare controls us.

Sure, there are work comp rules and regulations, laws and courts, but medical providers are far more interested in and aware of what Medicare/Medicaid/Private insurance wants/demands/does than all-but-insignificant work comp.

Well, that’s not exactly true – providers are getting ever smarter about how to profit from work comp.

The US health care system needs major reform – covering most/all of us, forcing providers to reduce the cost of care and cost per person, and improving the health of all of us.

I believe we’ll see major national health reform by 2025; others think I’m nuts. (we may both be right!)

If reform happens – or doesn’t – work comp will be affected. Here’s why.

Over the very near term, let’s assume the ACA dies when the Republican Attorneys General win their Texas lawsuit.

The next day – or darn close to it – the legal basis for our healthcare delivery and reimbursement system could be effectively gone. What will providers and insurers do?

Most health insurers will do everything they can to roll back protections for insureds, limit coverage, and tighten provider networks, because they’ll make a lot more profit doing that.

Then, providers will find their patients are increasingly under-insured, or their conditions aren’t covered, or the treatment they prescribe isn’t allowed.

In comes Fred Flintstone with a mushed foot suffered when he dropped a boulder on it, and voila! Provider problem solved…thank you workers’ comp.

If I’m right about national health reform and massive reform does occur, its highly unlikely work comp will be included in that reform. Without much stronger regulatory protection such as a universal all-payer fee schedule, savvy providers will increasingly target work comp as we’re woefully unable to stop sophisticated schemes to suck more dollars out of workers’ comp payers. 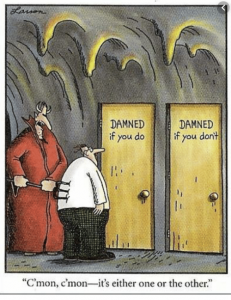