Among the several things that could affect workers’ comp, the toughest to handicap is the trade war.

Predictions are difficult mostly because one of the protagonists is entirely unpredictable. While we don’t know what will happen in the future, we do know how the trade war has already affected employment.

This from Yahoo Finance:

Moody’s Analytics estimates that Trump’s trade war with China has already reduced U.S. employment by 300,000 jobs, compared with likely employment levels absent the trade war. That’s a combination of jobs eliminated by firms struggling with tariffs and other elements of the trade war, and jobs that would have been created but haven’t because of reduced economic activity.

If the trade war continues thru the end of this year, Moody’s reports another 150,000 jobs will be eliminated. If the trade war isn’t over by December 2020 the total will double to 900,000.

Other data indicate manufacturing has already shrunk and the number of new jobs created dropped from 1.9 million last year to 1.3 million for the same period in 2019. Most troubling, the CBO is forecasting economic growth will slip below historical averages next year to 1.8%.

Sectors most affected are manufacturing, warehousing, distribution and retail. 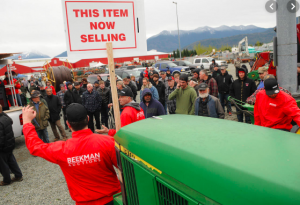 Where we live in farm country, the impact of the trade war is visible next door.

Farm equipment sales are slumping as soybean and grain prices have plummeted while steel and aluminum prices jumped. Dairy is a big part of agriculture here; when Mexico – the largest overseas consumer of our milk products – slapped tariffs on US dairy, we lost $1.8 billion in sales. Equipment manufacturers including Deere have lost sales, and the effect is rippling thru communities throughout upstate New York.

If things aren’t resolved by the end of next year, work comp will be losing $2 billion in premium annually.

2 thoughts on “The trade war’s impact on workers’ comp”