Social distancing works.  Hydroxychloroquine doesn’t. Remdesivir might.  A lot of “tests” may be wrong…Just because you’ve had COVID you may not be immune to future infection.  And COVID19 may lead to long term health problems.

estimated that current social distancing measures will reduce the average contact rate among individuals by 38% “Social distancing saves lives but comes at large costs to society due to reduced economic activity… the economic benefits of lives saved substantially outweigh the value of the projected losses to the U.S. economy.”

Hydroxychloroquine and variations thereof are no cure.

It’s becoming increasingly clear that Hydroxychloroquine and its various versions are no COVID19 cure. One study (that has NOT been peer-reviewed) showed more veterans with COVID19 that took the drug died than those that didn’t. Another study found no difference in outcomes for patients that took the drug and those that didn’t. The drug can have deadly side effects. [my March 27 post has a lengthy and citation-filled discussion of the drug and the faulty “research” used to promote it]

Preliminary data from an analysis of multiple studies shows 2/3rds of patients with severe COVID19 treated with anti-viral drug Remdesivir had “promising” outcomes.

One study in Chicago had positive results as researchers saw “high fevers fall “quite quickly” in remdesivir-treated patients and patients weaning “off ventilators a day after starting therapy.”

This is PRELIMINARY; much work still needs to be done. Additional clinical trials are underway, with one posting results by the end of this month.

Remdesivir is an injectable and to date has only been administered in hospitals.

If you’ve had COVID, are you immune?

We do NOT know. There is no evidence that those who have contracted the disease have immunity from a subsequent infection.  Serology tests look for antibodies in the blood, proteins whose function is to find and kill coronaviruses.

Usually those who have had a disease gain some immunity; that’s the idea behind vaccines. However, there is a report out of China that some patients previously infected tested positive after they were ostensibly “cured”.

One theory is the antibody tests are hitting on non-COVID19 viruses (like those that cause the common cold) and thus giving false results.

There’s growing evidence that people with severe cases of COVID19 may have long-term pulmonary deficits due to compromised lungs.  The most vulnerable are – as you’d expect – older folks, those with pre-existing conditions, and compromised immune systems

A study out of China found about a third of patients that had recovered from severe COVID19 had brain stem issues that manifested as dizziness, headache, seizures and other issues.

Another study found that a fifth of severe COVID19 patients had significant heart issues. Blood clots are also a common problem, one that can be deadly.

PTSD and other mental health problems are also reported – no surprise there.

There have been reports of significant kidney problems, however an earlier study in China found no acute (short term) kidney damage.

What’s clear is we are just starting to grasp the potential long-term health effects of COVID19 – and we will learn a lot more in the coming months.

There is a lot of mis- and dis-information out there, from “cures” to the assertion that 5G towers cause COVID19 to Chinese claims that COVID is a U.S.-caused disease to “evidence” that the virus escaped from a Chinese bio-research lab to ridiculous claims by “scientists’ that all the health problems are caused by an overactive immune system.

This is exactly why one needs to be very careful when reading about drugs, cures, tests, results, and infection rates...almost no one had heard of COVID just 120 days ago, all research is just getting started, and we are all learning as we go. And fear-mongers and charlatans love a crisis and get off on scaring people while they get their 15 minutes of fame.

Oh, and YouTube is NOT a reliable or credible primary source for scientific information. 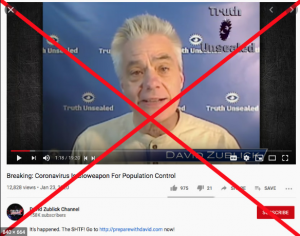