The evidence is piling up; ACA is strongly associated with lower work comp premiums. Almost a year ago I attributed improvements in work comp’s medical expense trend to ACA; now, the impact is being seen in improving combined ratios particularly in states that fully adopted ACA’s reforms. (here’s a map of Medicaid-expansion states)

That view is now getting traction outside our little world, with the LA Times covering the issue earlier this week.

Premium decreases are now being seen in Medicaid-expansion states; here are a few examples.

(I’ve purposely left out California, which has seen significant rate decreases however other factors beyond ACA are also affecting rates)

Of course, other factors are also in play here, including expanding employment and state-specific reforms. However, when you compare “ACA adopting states” with other states, the overall picture is compelling. 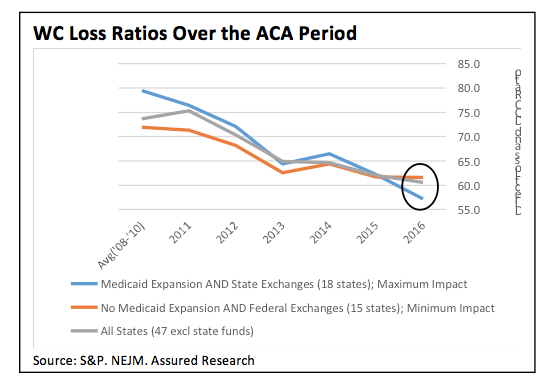 Newswires are on fire with analysis of the AHCA and its impact on the nation’s medically insured. Advocates point to the CBO’s estimate that it could reduce federal deficits by $337 billion over the ten years 2017-2026. Detractors, and there are many, focus on the CBO’s estimate that some 14 million Americans could lose healthcare coverage by 2021; climbing to 24 million by 2026.

New, 2016 industry data shows that the workers’ compensation loss ratio in states maximally affected by the rollout of the ACA (aka ObamaCare) have begun to outperform states minimally impacted by the ACA (see nearby figure). Our delineation stems from a recent New England Journal study which found that states expanding Medicaid and those introducing state-based exchanges saw the largest increase in the medically insured. In 2016, the WC loss ratios in those 18 states outperformed the 15 minimally impacted states by 440 basis points. The maximally-affected states also outperformed nationwide averages in 2016.

This new data comports with intuition and, increasingly, the anecdotes we pick up from industry sources. The ACA has likely been a contributing factor to the favorable trend in WC loss ratios. The evidence is significant: steadily declining WC loss ratios during the ACA-years, historically low medical inflation and favorable WC loss-reserve development. Most industry experts believe the expansion of the medically insured has resulted in less case shifting and less cost shifting (e.g., fewer fraudulent claims and comorbidities treated under WC).

The AHCA, in its current form, should have the opposite affect; it seems likely to lead to more WC claims and cost shifting – rising loss ratios. The nearly complete unwinding of the expansion in medically insured could accelerate cost-shifting, in turn putting pressure on WC loss trends and reserve margins. The initial wave of newly uninsured (14 million by 2018 according to the CBO) would result from the repeal of the individual mandate. We don’t have an estimate of the working population in that cohort but presume it’s meaningful. The second wave of newly uninsured (another 10 million) would result from changes in Medicaid enrollment. According to WC experts (link here to one prominent blog) some 81% of Medicaid families have at least one member of their family working. That presents plenty of cost-shifting opportunities.

We’d expect the negative impacts of the AHCA, if rolled out in its current form, would first appear in the states benefitting the most from the Affordable Care Act. Large states including California and New York are among the 18 included in our figure above – contact us for a complete listing.

WC rates across the nation have begun to decline – evidence that WC insurers discount favorable trends into their ratemaking. Regulators will probably have little tolerance for preemptive rate increases based on this evidence, but it will be interesting to see if the pace of rate decreases slow. If not, WC loss ratios will have almost surely found their bottom in 2016.