Research published in HealthAffairs a study estimating COVID19 will cost somewhere between $164 billion and $654 billion.

Kaiser Permanente in northern California – a plan with 11% market share – had a grand total of 377 hospital admissions for COVID19 in March.

According to the WCIRB, COVID will cost California’s work comp system between $2.2 billion and $33.6 billion.

Private conversations with work comp executives show something much different; COVID19 costs for a major insurer with significant exposure in the healthcare sector total about $1 million incurred to date.  A major state fund has seen less then a couple dozen cases. Multiple insurers have less than 40 cases that have incurred any costs to date.

In a nutshell, researchers are either being forced (in WCIRB’s case) or otherwise decided to come up with analyses based on really skimpy, incomplete, and not-very-helpful data. For example, we

a) don’t know the real infection rate as we aren’t testing anywhere near enough people;

b) we don’t know the real death rate for a bunch of reasons;

c) different areas have been affected very differently. This has been a disaster in Albany GA and NYC…and not even close in most of California, or Alaska. Louisiana has been hit very hard, but neighboring Arkansas hasn’t.

d) different areas have responded very differently; California and Washington shut down early and broadly; New York did not.

e) different areas are different; NYC is very crowded, even California’s most populous cities are a lot more spread out.

f) but even in smaller cities that are more spread out, one infected person can expose a lot of people, resulting in a rapid increase in cases (Albany FGA).

I bring this to your attention just to point out that estimates are pretty useless, that COVID19’s impact is going to be massive in some places and a minor inconvenience in others,

So, look for data that’s specifically relevant to your geographic area and covered population. Figure out if that area is testing enough folks, is complying with common-sense prevention techniques (social distancing, for example), and is reporting data accurately.

And then don’t be surprised if you are really surprised. Because there are so many confounding factors and different things that can affect the numbers, as of now anyone who is projecting is doing this… 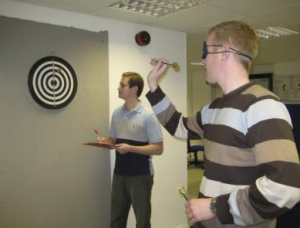 Making decisions based on current data is as dangerous as standing near a guy throwing darts blindfolded.